This Bond Villain Hideout Can Be Yours For a Price 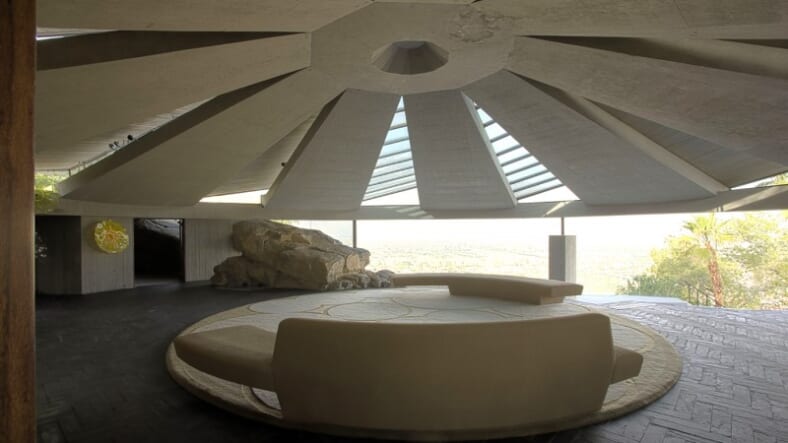 It was an exotic set in the James Bond film classic Diamonds Are Forever and featured in a popular men’s magazine in 1971 as “The Ultimate Bachelor Pad.” It’s a five-bedroom estate in Palm Springs, California on Southridge Drive and can be yours if you’re prepared to plunk down $10.5 million.

The Elrod House, named after interior designer Arthur Elrod, was designed by Frank Lloyd Wright protégé John Lautner and built in 1968. As Palm Springs Life reported in 2009, the audacious UFO-like look of the residence originally confounded Palm Springs residents, but Lautner, like Wright, had a back-to-nature aesthetic that he fully implemented with this design:

Designed to shield the home from the intense desert sun, the roof rests on curved concrete walls. Black slate tile floors add drama, as does an indoor-outdoor swimming pool and boulders massed in the living room. When Lautner saw rocks exposed on the 23-acre site from grading, he directed the contractor to dig 10 feet deeper, uncovering massive rocks that would became an integral part of the interior design.

As contemporary photos published by The Robb Report show, it’s been well-maintained and still retains its futuristic feel.

We’re all about the coolness factor. Here’s a scene from Diamonds Are Forever featuring The Elrod House.

Talk about an awesome conversation starter for your first guests.

Take a look at the Christie’s International Real Estate listing for The Elrod House here.