How the business genius behind Patrón and Paul Mitchell turned $700 into a $3 billion empire. 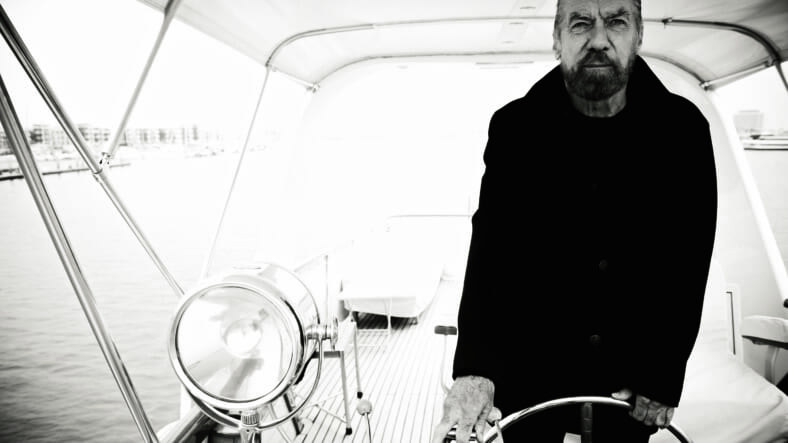 For his son’s 18th birthday, billionaire John Paul DeJoria flew to Tanzania to climb Mount Kilimanjaro, finally answering that age-old question, What do you get the kid who already has a Tesla? (Or unfettered access to his dad’s Tesla, anyway.) JP, as the 72-year-old titan is known, didn’t train very hard for the 20,000-foot climb, which is pretty bold considering 1,000 people need to be evacuated from the mountain every year.

“I got on my wife’s treadmill,” DeJoria explains with a shrug, “put it at 15 degrees—that’s as high as it will go—and did that for half an hour. No big deal.” He and his son summited on the teen’s birthday. If you’re surprised, you should have seen his guides.

“We get to the bottom,” DeJoria says with a laugh, “and these Tanzanian guys are dancing and chanting, and every now and then you hear ‘JP.’ So I started dancing with them. My guide was laughing so hard. He’s holding his sides. He said, ‘Do you know what they’re saying?’ I said, ‘No, but it sounds cool.’ He said, ‘They’re saying ‘JP didn’t die!’ ”

DeJoria, the serial entrepreneur behind the iconic brands Paul Mitchell and Patrón Spirits, has been defying expectations for decades. He may have been homeless twice in his life but he seems to have things pretty well figured out these days; we’re eating homemade guacamole aboard his 60-foot yacht, Pyrat, a sleek and regal plaything with a Viking range in the kitchen, heated towel racks in the master bath, and more oiled mahogany than a lumberyard.

Two chaise lounges upstairs offer a dream spot for staring out at Marina del Rey, California, where the boat is docked. It’s windy this afternoon and JP himself is dressed in a blue linen button-up shirt, his signature ponytail pulled tight—big smile, big hands—looking exactly like he did in those famous Paul Mitchell commercials, or in the Adam Sandler movie You Don’t Mess with the Zohan, where he had a cameo as himself.

“Normally, I’m in all black—black pants, black shirt,” he says. “When I started, I didn’t have any money, and nobody knows you have the same clothes on. But I’m on the boat today. I thought I’d put some blue on.”

He’s telling me about one of his latest ventures, AubÍo, a homeopathic, over-the-counter remedy for cold sores, which he believes will be a billion-dollar business soon. It’s a bold move into the world of pharmaceuticals, and DeJoria impressively rattles off figures from the World Health Organization about how rampant the cold sore virus really is.

“Two thirds of the world’s population under 50,” he says, noting that his salve is as effective as it is because it’s made from carnivorous plants. He’s a persuasive pitch man, and I’m ready to invest in whatever he’s selling. When he later tells me he doesn’t do e-mail (“I’d be inundated”), he sounds less like a Luddite than a Zen master. Want to know how he turned $700 into a $3 billion fortune? School’s in session.

Drinks appear as DeJoria launches into his superhero origin story, which plays out like the best TED Talks: an up-from-the-bootstraps tale that leaves you itching to disrupt some long-slumbering industry. His life story is an unlikely rags-to-serious-riches epic that’s as remarkable as it is surreal, kicked off by one billion-dollar business idea.

His friends include Roger Daltrey and Lionel Ritchie. His daughter Alexis is (yes) a professional racecar driver who, in 2013, married the tattooed TV personality Jesse James (who is currently building his father-in-law a custom chopper). In DeJoria’s office, there’s actually a red phone for emergencies. “I’m the consul general for Mali,” he tells me.

Talking to this self-made billionaire, it’s impossible not to notice his outsize optimism, which is even more admirable when you consider how high the deck was once stacked against him. DeJoria’s dad walked out before he was two years old, leaving his mom to raise him and his older brother alone on the east side of Los Angeles in Echo Park, an immigrant neighborhood of humble roots.

His mother worked as a milliner downtown but when things at home got hairy, JP and his brother moved in with a foster family for a stretch. As a kid, he was never not working—selling greeting cards, making flower boxes out of 25 cents’ worth of wood and selling them for 50 cents—anything to contribute. After high school he went into the Navy, which stationed him on an aircraft carrier in the South Pacific for two years.

DeJoria returned to L.A., and when his girlfriend got pregnant, the couple got married. It was a happily-never-after story.  “I came home from work,” JP recalls, “and as I drove up she came down and said, ‘Oh, I gotta go to the store’ and grabbed the keys. I said, ‘Okay. See you in a bit.’ I go up the stairs and there’s my son sitting on a pile of clothes. There’s a note to the effect of, ‘I can’t handle being a mother, he’s all yours. Oh, by the way, the bills have not been paid.’ She’d cleaned out what little money we had in the bank and hadn’t paid the rent in three months.”

When father and son got evicted a few days later, JP bought a beat-up car where they could sleep. “I was a kid,” DeJoria recalls. “I was just a kid having a kid. They should make it a law: You can’t get anyone pregnant until you’re 25 years old.”

DeJoria was in the process of splitting with his second wife when he started Paul Mitchell—with just $700 in the bank (and half of that was from his partner). It was 1980 and he was 36 years old, living in his car for the second time after an investor had pledged half a million dollars only to pull out at the last minute. DeJoria, who’d done a stint in sales and marketing at the hair care giant Redken, didn’t blink.

When you’re broke, the only bet you can make is on yourself. He was a born salesman, having sold everything from encyclopedias to Dictaphones. (He’d also worked as a master of ceremonies at a recreational vehicle show at the Anaheim Convention Center, but that’s another story.)

Surely he could move a shampoo and conditioner he actually believed in, a duo developed with his friend, prominent hairdresser Paul Mitchell. So JP took a sample run—the only stock he could afford—and went door-to-door to salons on Ventura Boulevard in North Hollywood soliciting orders. Then he took those orders to his distributor, laid the yellow carbon sales receipts on the table and negotiated to be paid up front. He lived on the cheap, paying creditors when he could.

The best ideas are sometimes born from the strictest limitations. If you’re wondering why the iconic Paul Mitchell bottle is nothing but black-and-white text, well, that’s because printing with color would have cost an additional five cents per bottle, and JP was watching every penny. But what he understood on an almost elemental level was the appeal of exclusivity.

There’s a reason Paul Mitchell products are only found at licensed salons. (The company actually has a hotline to report supermarkets and drug stores selling their products.) Serious hurdles emerged, of course, but JP met each head-on, never afraid to use emotion to fuel the company’s expansion. When Paul Mitchell himself passed away in 1989 after a bout with pancreatic cancer, some watchers predicted the end of the company.

Instead, JP began to appear front and center in the company’s TV commercials, vowing to expand. “I said, Nope, not over. I’m going to put my face out there and tell the world these products are great. I’m the guy. You got a problem, see me,” he says, adding, “We have over 120 beauty schools today, and I’m at the opening of every one.”

If you’re wondering what you could possibly learn from a former door-to-door salesman in the age of Silicon Valley, DeJoria is one step ahead, throwing down the gauntlet to the Slack generation’s would-be entrepreneurs. “Can you do today what I did in 1980 with Paul Mitchell?” he asks. “Starting a company with $700 dollars? The answer is, it’s easier today. In 1980, inflation was 13.5 percent. Unemployment was high. We had to wait in line for gasoline. If you could get a loan, the prime rate was 17 percent.” What’s your excuse?

What’s so striking about DeJoria, who’s a master at eye contact, is his even-keeled practicality and his willingness to show up. He’s old-school, bordering on analog. He’s been using the same Nokia flip phone for the past 10 years. (“My battery, I think, outlasts your battery two-to-one,” he says, anticipating my next question: “They stopped making these years ago, but I bought three extras, in case this one breaks.”)

His phone book—an actual, spiral-bound phone book—is 30 years old; it’s in the backseat of his 12-year-old Mercedes truck. And because it helps to be prepared for anything, two $20 bills peek out of the front flap. Even his fitness regimen seems frozen in amber: He does 40 Navy SEAL push-ups three times a week.

But if you’re paying attention, you’ll notice that the man is light-years ahead of his time in all the ways that matter. Long before the Google cafeteria was making headlines with its all-you-can-eat organic yucca fries, employees at Paul Mitchell and Patrón were all enjoying free lunch. It’s worth remembering that DeJoria started the whole top-shelf tequila craze with Patrón in the late ’80s when, tired of the odd awful hangover he got from drinking the cheap stuff, he asked a friend to go to Mexico and bring back “whatever the aristocrats drink,” feeling strongly that men would pay a premium for smoother tequila.

He’s in his seventies but his passions are Millennial. He and his stunning wife, Eloise, whom he met on a blind date 25 years ago, settled in Austin, Texas, in part because it was eco-friendly. “We were looking for a place to raise our son,” he says. “We thought, ‘Let’s do this one really right.’ ” JP pretty much only flies private these days, but prefers his Falcon 2000 to the more luxurious Gulfstream IV because of its gas mileage. “The Falcon has a range of over 3,000 miles and it uses half the gas of a G4,” he says.

When asked about his sizable fortune (an estimated $3.1 billion), he pivots: “You mean, ‘Why aren’t you sitting on a 300-foot yacht right now?’ Because I have no need for that. This is the coolest boat.” He hasn’t exactly taken a vow of poverty, with second homes in Malibu, Las Vegas and Aspen, and a favorite Balinese-inspired spread on the beach in Kona, Hawaii.

But he’s more humble and generous with his wealth than the vast majority of others in his position. In 2011, he signed on to Warren Buffet and Bill Gates’ The Giving Pledge—a fraternity of the super rich who’ve all vowed to donate at least half of their fortunes to charity. For DeJoria, it was a no-brainer.

He’d previously launched Grow Appalachia (which feeds about 35,000 people from local gardens) and traveled to sub-Saharan Africa in 2008 to join forces with Nelson Mandela in his efforts to feed impoverished children and orphans through Food4Africa. DeJoria’s philanthropic work is overseen by his foundation, Peace, Love & Happiness, which sponsors an annual Hill Country motorcycle ride through Austin, Texas.

“My motto,” he says, “is: Success unshared is failure.” Once a year, he and his fellow Giving Pledge billionaires get together for a weekend of conversation and strategic thinking. It’s incredibly noble, but what I really want to know is, Who pays the check? He laughs: “Bill Gates pays.” At 72, I wonder if he’s considered retirement. “God, no,” he laughs. And with that, he pulls out a bottle of Patrón and two glasses. “Shall we do a shot?” I thought he’d never ask.