The ‘Nitro Circus’ star opens up about making the most of your next trip to the Far East. 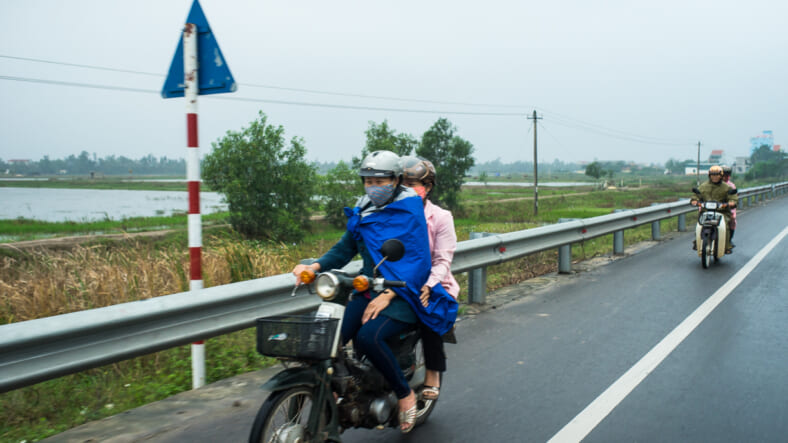 If you’ve never been to Vietnam, it’s hard to properly grasp how utterly all-consuming the atmosphere is. Smog hangs heavy in the sky, swallowing you whole. The air sticks salty to your lips, thick with dozens of indiscernible scents.

A dull yet ever-present hum rings in your ears as swarms of people on scooters just narrowly miss taking you out at the hip. The streets are where life happens. Cooking, grooming, bartering, families prepping for that evening’s festivities. The environment is truly a battle with the senses, and it takes no prisoners.

Enter Andy Bell. As Robert Frost once said, “Freedom lies in being bold,” and Andy Bell is as bold as they come. A former motocross freestyle rider and stuntman, Bell is not one to shy away from a gnarly adventure.

Getting his start riding FMX professionally, Bell quickly leaned into the world of entertainment, working alongside some of the greatest daredevils in the business, including Red Bull X-Fighters, and the Loiter Squad.

He’s also appeared on Nitro Circus, Jackass 3D, Jackass 3.5 and Rob Dyrdrek’s Fantasy Factory. While Bell is a natural on screen, it wasn’t long before he took his talents behind the camera, founding film production company Sweatpants Media, which even received its first Tribeca Film Festival nod this year for their short documentary Under an Arctic Sky.

Now, Bell continues to add to his impressive and ever-expanding resume with the Toyota TRD Pro Challenge, a series of videos that feature Bell and his compadres galavanting around the globe to test the limits of these vehicles in the world’s most hostile domains.

We caught up with the stuntman turned studio producer to discuss everything you need to succeed in Vietnam.

Was this the first time you’ve ever been to Vietnam?Yeah, it was my first trip to Asia other than Japan, so I was super stoked to go there.So, you’re on this wild road trip crossing the entire country from the South of Vietnam all the way up North. Did you have a favorite pit stop along the way?My favorite of the bigger cities was Kanoi. That old quarter was pretty awesome. A friend and I found a mini-motorcycle rental place and borrowed some small, super weird bikes. We drove around popping wheelies up and down the streets of Kanoi. We got really crazy looks from the locals, but it was a really good time.

Tune in to Velocity Channe tonight 8:30 pm e to see @rolandsands @jamiebestwick and I drive from South to North in #Vietnam in the #trdpro s. Here Roland is getting directions to the biggest mud hole in the jungle!

Sounds fun. Vietnam is known for its crowded streets. How was navigating all of that traffic on your bike?It was 100% the most stressful driving I’ve even done. When we raced the Toyota 1000 Desert Race to introduce the TRD pro a while back, we were going full speed across the sand at 100 miles an hour.

Your eyes are darting in every direction – way up ahead, right in front of you, to the side, looking for bumps and rocks and cactus. Your brain is melting. Driving in Vietnam is like that… except now you’re looking for humans. You’re not going to hit a cactus, you’re going to hit a kid, or a cow, or some massive cart overstuffed with 10,000 bales of hay.

You’re constantly paying attention, because it’s as if the swarms of people on scooters around you have zero regard for their own life. If you’re cruising up a highway at 50 miles an hour, they will enter from a side road, never once looking for the direction traffic is coming from.

The scooters just move around you like fish in the ocean, and in Vietnam, if a bigger vehicle hits a smaller vehicle, it’s always the bigger vehicles fault. No matter what. Shit just happens there. It’s wild.

sunday afternoon traffic in Hanoi puts NYC rush hour to shame. can you catch my lil homie waving at the end? | #letsgoplaces @maximmag

It’s true. It’s incredibly hectic and borderline lawless. Was there ever a moment on the road when you thought to yourself, “What the fuck have I gotten myself into?” Did you ever get stuck or lost?

Yes, 100%. It’s because I made the mistake of listening to my road trip partners, Roland Sands and Jamie Bestwick. We were trying to film in a crazy intersection and there’s thousands of people on scooters going in every direction, and I accidentally end up going the wrong way down a street that was moving at 1 mile per hour (per Roland’s suggestion).

It wasn’t dangerous, but being that I was in a huge Toyota Tundra surrounded by scooters in front and behind me, I was stuck with nowhere to go. I finally end up backing up 100 yards down the street with, seriously, 10,000 people on scooters looking at me like, “You are such an American dick.” Even though I’m Canadian.

Vietnam is definitely known for their interesting cuisine, what was the craziest thing you ate while you were over there?Oh. We did have one night where we ordered the “delicacies” while we were in Hoai An, which was a fetus egg, a.k.a., eggs that were mostly matured into a baby chicken, but not quite. So, there’s a beak and some feathers and some feet and stuff. We had a dinner of that “egg”, a decomposing fish head, (which didn’t taste as bad as it sounds, it just smelled terrible), and then boiled duck heads and a bunch of grub worms.Sounds tasty.Yeah, that was quite the meal. ​I don’t really need to have that meal ever again, but I can say that I did it. The coolest thing I think we ate was the continental breakfasts, at the hotels we were staying at. Bowls of phó and fried rice every morning.

What’s the best party spot in Vietnam?Unfortunately, we didn’t really get to party much. Being both talent and owner of the production company, it wound up being much more of a work trip, but Hanoi in Northern Vietnam has great vibes. That whole quarter was cool, so if I was to go back I’d definitely head there. I have a feeling I might be able to find some good places to party in Hanoi. If you’ve never been to Vietnam before, what would you say is an absolute must-see?  Ninh Binh. That area said to me, “Hey, you’re not in Kansas anymore. You’re in fucking Vietnam.” It was just gorgeous. The landscape was absolutely incredible looking and we actually stumbled upon the area where ‘King Kong: Skull Island’ was filmed.

We had to change locations last minute due to weather issues, so while location scouting we founds this huge, old boat and chunks of what looked like was an abandoned building. We were like, “Wow, look! This must be left behind from a local village hundreds of years ago!” and then quickly realized we were accidentally on the set of a movie. So we inadvertently shot right where they shot ‘King Kong.’ That was definitely cool, and I’d 100% go back.

Sounds incredible. What are some projects in the pipeline that you can tell me about?

Well, we just finished a crazy shoot in Havana, Cuba with BJ Baldwin and his million dollar trophy truck called “Recoil.” That was pretty epic. Now we’re in the midst of prepping the next series of TRD Pro Challenge videos. ​I’m not sure if I can say where we’re going, but I can tell you we’ll be in eastern Europe, and it’s somewhere very spooky…

Interesting. We’ll be on the lookout! Any final tips you can share in regards to traveling to Vietnam? Maybe something we definitely need to bring with us?Well, how about things you don’t need… For example, when you’re going to Mexico, you should always keep $100 hidden away for a bribe. It doesn’t seem like they take bribes there, so you can skip that.Okay, no bribes. Good to know.  I think for sure just bring the willingness to try different shit, and if they say that the delicacy is decomposing fish heads… you gotta at least give it a shot. You’re in Vietnam, how many times are you going be there? Just roll with it.

How about tips for surviving on the road? Oh, if you’re going drive, use your horn about every two seconds you’re on the road. Always be on the horn. Here in America, the horn is a big “fuck you,” it means you’re pissed off. In Vietnam, it’s purely an informational tool to let people know, “Hey, I’m behind you, I’m coming up beside you.” No one gets mad if you use the horn.