This is just brutal. 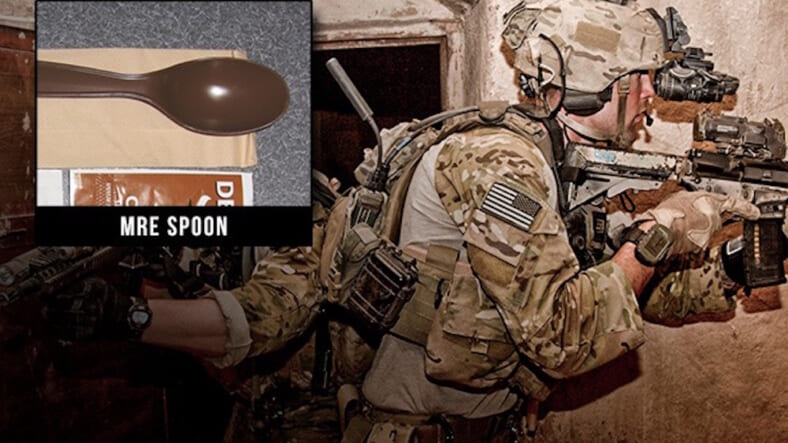 That truism was backed up by veteran-staffed website Grunt Stuff, which spun a riveting tale of an impossibly badass Army Ranger who fatally stabbed a terrorist in the neck with his plastic MRE spoon at the Haditha Dam in Iraq.

The brutal utensil slaying happened after a group of Rangers cleared a house and confronted several terrorists inside. The Rangers killed all of the bad guys—except for one who tried to pull the pin on a grenade amide the smokey chaos.

The story goes something like this. A small group of rangers were ordered to clear a building. As the group of rangers approached this particular building, they were unaware that roughly four hostile combatants wait inside. The rangers stack the door, reach to breach. As they breach and enter the building, they are met with an exchange of gunfire. Without hesitation, they return fire, killing all but one enemy combatant. Although one fighter was alive, it took a few moments for the rangers to realize the hostile was attempting to pull the pin on a live, handheld grenade.Being only feet away, our ranger buddy’s instincts and training took over. He rushed the enemy, immediately engaging in hand to hand combat. As they wrestle, this ranger can’t seem to get to his knife due to all of his gear being in the way. Again, without hesitation, he reaches for the first solid object he could get his hands on; an MRE spoon!

After grabbing the spoon, he began stabbing the enemy in the neck until he was dead.

We’re not totally convinced this story is true, but it’s still the most badass military tale we’ve heard today. Nice work, mystery Ranger: You definitely earned a medal from us.