Why Athletes Celebrate Victory With a Slap on the Butt

They bro-slap because they care. 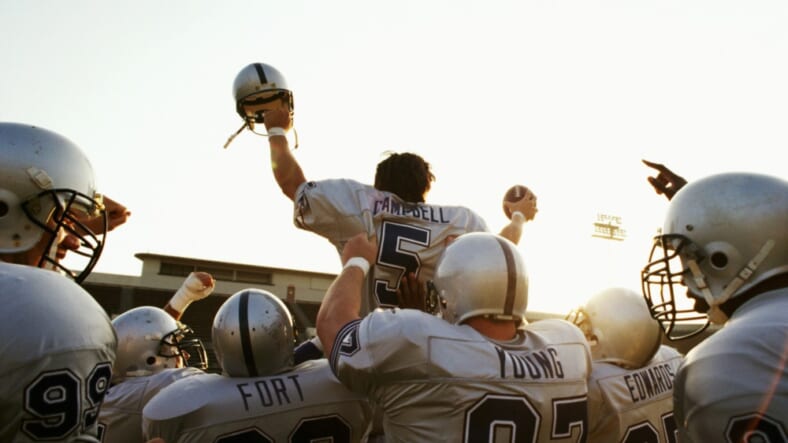 If you’re a sports fan, particularly the NFL or soccer, you already know there’s a lot of manly affection happening on the sidelines, mainly in the form of butt slapping, hugs that seem more like tackles, and Gatorade showers. But did you know that those bromantic gestures of affection use the same area of the brain as romantic cuddles?

What I’m basically saying is, if Bill Belichick were to give Tom Brady a hearty bro-slap on the ass for a job well done, the same area in Tom’s brain would light up as if he were cuddling his supermodel wife Gisele Bündchen on the couch while they Netflix and chill.

In 2014, researcher Eric Anderson studied cuddling among 40 straight male athletes, where 93.5% said they enjoy spooning with their bros. “We very often have hangover cuddles and naps together,” said one of the participants in the study, which was published in the journal Men and Masculinities. The study also revealed that 97.5% of the participants had shared a bed with another guy.

Another participant added, “I love a quick cuddle. Just so you remember your friends are around and are there for you.” Aww. That’s sounds pretty valid, and is probably what NFL players are thinking when they hug or fist bump a teammate. It shows they care, in a manly, purely nonsexual way.

Now for the science-y part. People enjoy physical touch for two main reasons – social bonding, and for a neurochemical feel-good experience. First of all, we love hugs and cuddles because it’s socially reassuring. A meaningful touch from someone important to us is a behavioral cue that shows they care.

The other thing that makes us love physical touch is a nice neuropeptide-cocktail of oxytocin and dopamine that releases during a hug. When that oxytocin starts flowing, it triggers the release of dopamine, which comes from the reward center of your brain, making you feel like a million bucks. With that said, fist bumps, quick hugs, and butt slapping within teammates creates a halo of trust and compassion, and everyone just feels good about themselves.

Now when everyone starts grabbing butts and pouring Gatorade during the Super Bowl, you know it’s only because they care.