It’s stronger than most of the liquor in your home bar. 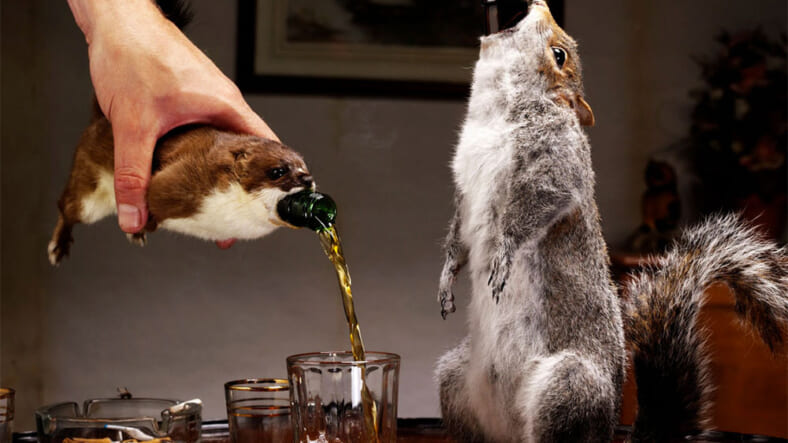 Until August 31, 2016, breweries in the state of Ohio were legally prohibited from manufacturing beer any stronger than 12 percent ABV. That seemingly reasonable cap disappeared at the beginning of September, and the brewmasters at Brewdog Columbus decided to celebrate in hilarious style with a beer they call The End of History:

We couldn’t think of a better way to thank our legion of new stateside supporters whilst at the same time celebrating the freedom the tireless campaigners in Ohio’s craft beer scene have helped secure. The End of History is our iconic 55% abv Belgian-style ale brewed with nettles and juniper, so we are unleashing the full potential of our American brewkit right from the start, flipping two fingers at the defeated neo-prohibitionists at the same time.

The bottle comes embedded in the body of a taxidermied squirrel, for some reason. It’s perhaps the brew’s rarity as well as a limited number of squirrels that has led Brewdog to keep this particular ale from mass distribution. They write that they’ll only release The End of History “as an exclusive beer for our Equity for Punks USA shareholders who invest more than $20,000.”

If you’re down with the spirit of this endeavor, want this serious conversation piece and have twenty grand to invest in Brewdog, Equity For Punks wants you to get involved.

We’d have trouble looking the poor squirrel in the eye, but it sounds like it would only take a few swigs of The End of History for that to no longer be a problem.