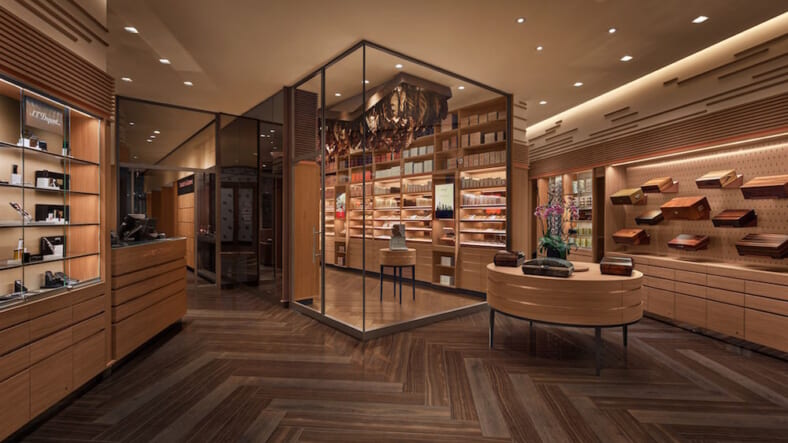 Even before Gordon Gekko drooled over his treasured Cuban Davidoffs, the brand has enjoyed a stylish place in the hearts and minds of Wall Street’s cigar-chomping aficionados.

In the last few years Davidoff has marshaled a hostile takeover of Manhattan’s lounge spaces—they’ve re-deployed across midtown and, as of now, taken downtown by storm with a new World Trade Center location.

“There’s never really been anything downtown,” said Luis Torres, the U.S. director of retail for Davidoff. A few scattered locations below 42nd Street allow indoor smoking, but admittedly most of them are either aging, or reflect an outdated, Reagan-era style.

Brookfield Place is a polished, eye-catching, clean space in a city where anti-smoking progress has left a limited number of sites where you can be left to smoke a stogie in peace. The soft opening has already made for some celebrity sightings: the cast from NBC’s J-Lo and Ray Liotta-headlined cop drama, Shades of Blue, has frequented the shop from nearby shooting locations.

Davidoff’s new shop offers cigars and accessories, as well as plenty of seats for enjoying them in peace. If you find yourself spending enough time there, they’ve even got a humidor leasing program: $6,000 a year gets you a perfectly maintained humidor-locker where you can stack your boxes for next time.

Whether you want to fill a locker or try a smoke after work, we’ve compiled a list of the best smokes available at the new shop. There’s something for everyone, and every occasion.

Davidoff has given each and every one of its stores an exclusive cigar available only in that location, and this one’s definitely worth the trek. A mild, honey and almond smoke goes perfectly with your first cup of coffee of the day. It’s what we in the business call a perfect morning smoke.

A dark and bold Ecuadoran leaf adorns Davidoff’s casual brand. Camacho is about being bold and different, and this smoke delivers on that promise with dark hickory flavors, rich cocoa, and tons flavor in every puff.

Davidoff rebuilt the Winston Churchill line from scratch last year, making a once-underperforming product into a tasty (and underpriced) range. They’re a little bolder than the classic Davidoff blend, with notes of coffee and an oaky spice that goes well with a drink.

The newest release from Davidoff just landed in New York, bringing a new shape to a relatively new blend. Davidoff’s Nicaraguan tobacco gets the rectangular shape from being pressed in vises after rolling. It intensifies the flavors too, getting a bit peppery with notes of dark chocolate.