That $1.5 Billion Powerball Lottery Jackpot Won’t Be the Last

A professor explains why we should get used to billion-dollar prizes. 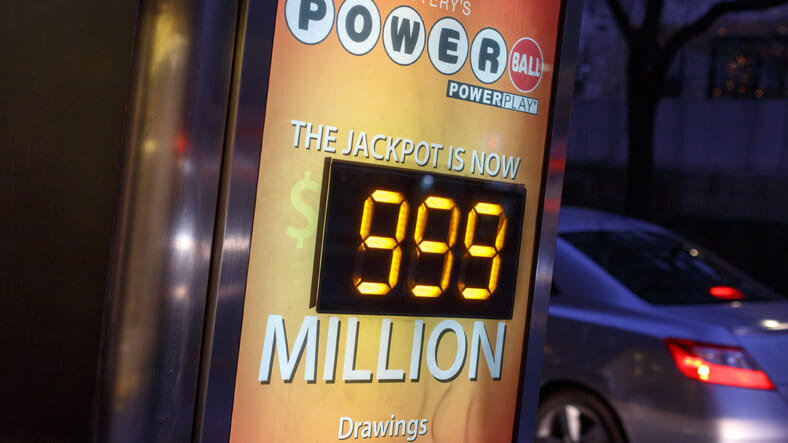 You’re more likely to get struck by lightning while drowning than win Wednesday’s $1.5 billion Powerball jackpot, yet something still possessed you to buy into the lotto frenzy and get a ticket. Then again, the Powerball jackpot’s never been this big before: the last record lottery in the U.S. was the $590.5 million Powerball jackpot that tempted citizens in 2013. No wonder the entire nation is freaking out. Would you pass up the chance to become a billionaire?

But the chances of grabbing that jackpot are actually slimmer than ever. A rule change by the Multi-State Lottery Association (MSLA) last summer lowered the odds of taking home the jackpot prize by about one-in-120 million. It doesn’t matter how large the pot is; the odds are absolutely not in your favor.But Dr. Matt Bailey, associate professor at the Bucknell University School of Management, isn’t surprised by the soaring jackpots, which are literally becoming too big for billboards. For the last few years, Dr. Bailey’s spent his time analyzing the psychology and decision-making processes behind a lottery ticket purchase and the strategies lottery designers employ to drive up ticket sales. He thinks these unprecedented jackpots (and the frenzies they inspire) are the new norm.Maxim spoke with Dr. Bailey about the current lottery obsession sweeping the nation.

What does the recent Powerball mania indicate about human behavior when it comes to games of chance like the lottery?It depends. If you are playing with a couple dollars for “fun,” it just indicates an interest to dream of what could be, like financial independence. Given the number of people out buying tickets for such a large jackpot, it is more about our tendencies to focus on outcomes ($1.4 billion!) and ignore the actual likelihood of the event (1 in 292 million, in this case).

What’s your take on the lottery’s rule changes lowering the odds of winning the Powerball? As I understand it, the lottery wanted to increase sales of tickets [Editor’s note: Powerball ticket sales declined nationally by 19 percent in 2014 alone]. With that goal in mind, it was the perfect move and, as current events indicate, it has paid off. By changing the odds (increasing the possible numbers for the five draw by 10 and decreasing the possible numbers for the Powerball by 9), the estimated probability of a winner for each draw has been reduced significantly. The odds of a drawing producing a jackpot winner were 1.5 times greater under the old system. As a result, there is a greater chance that there will not be a winner each draw and the jackpot will continue to grow, drawing in more players each week. As the jackpots grow, they receive more media attention, and more people who would not regularly play suddenly decide to join the frenzy.

You conducted a decision-making analysis of consumer behavior after a record jackpot in 2012. What did you find?The interesting insight was that as the jackpot grows, more players are drawn to play, thus increasing your chances of sharing the jackpot. In terms of maximizing your expected return, accounting for likelihood of winning and the magnitude of the prize, you would often be better off playing when the jackpots are smaller. In other words, it could be better to play when the jackpot is $250 million than when it is $500 million and you are likely to split it due to the increased numbers of people playing.

Under the $1.4 billion jackpot, I estimate the average return on your $2 ticket to be $1.03, accounting for all factors. Under the old system, a jackpot of “only” $330 million would provide the same average return.

Is there anything about the recent Powerball mania that surprises you? Some of the incorrect analysis has surprised me. Such as, “the more tickets that are sold the longer the odds become.” The odds you win don’t change, but the amount you might win will. As for the mania, money has a “decreasing marginal utility” for people. In other words, the value of winning $301 million is no different from winning $300 million for most people. However, winning $1 million is much different from winning $0, even though the difference in both is the same $1 million. This is fairly obvious, but along these lines, I would argue that the life impact of a $300 million jackpot versus $1.4 billion is similarly small. So, I do find it interesting when I hear people say something along the lines of, “I don’t play the Powerball unless the jackpot is above $300 million.” The increase in the number of tickets purchased implicitly supports this view.

Why are big jackpots so much more enticing than smaller amounts that offer better odds? Anecdotally, “going with your gut” is often praised. Weighing the outcomes by the odds takes time and a little analysis. A common decision-making bias is to ignore the probability of events. Because of this, the prospect of the big payout skews our thinking and blinds us to better alternatives.

Do you reject the concept of the ‘rational consumer?’  In the general sense, yes. We are all biased and irrational. The key is to understand and accept that these biases are exploited.

How bad do you think the odds would need to be before people would stop buying lottery tickets? If our brains don’t tell us to stop when the odds are 292 million to 1, would we ever stop? Honestly, I don’t think it is as much an issue of odds as it is an issue of observation. If the jackpot is won too frequently, it will never be large enough to spike interest. If it is won too infrequently (due to long odds), people may lose interest due to a lack of reinforcement and only buy after it has grown sufficiently. This latest change is a move to find that “sweet spot” between the two to maximize consumer demand.

Is buying lottery tickets fundamentally irrational?Financially, yes, but the lottery can be entertainment. From the time you buy a ticket until drawing, you can dream of how you’ll spend the money you won’t win.

Do you consider these rule changes to be unethical? No. The odds are freely available. I do think that touting the change as a benefit to players, as the advertising has done, is deceptive.

As for the lottery in general, I don’t think the government should be in the business of running a lottery, but I don’t know if I would call it unethical. It is often called a “tax on the poor.” For some people, they may view the lottery as their only hope to lift themselves out of poverty. As a result, they spend non-discretionary dollars in the hope of winning. Clearly, the government should not be in the business of exploiting the poor, but I don’t think the dissolution of the lottery would eliminate these problems.