So, Let’s Talk About Your Cell Phone and Your Sperm

Your smartphone might be bad news for your swimmers. 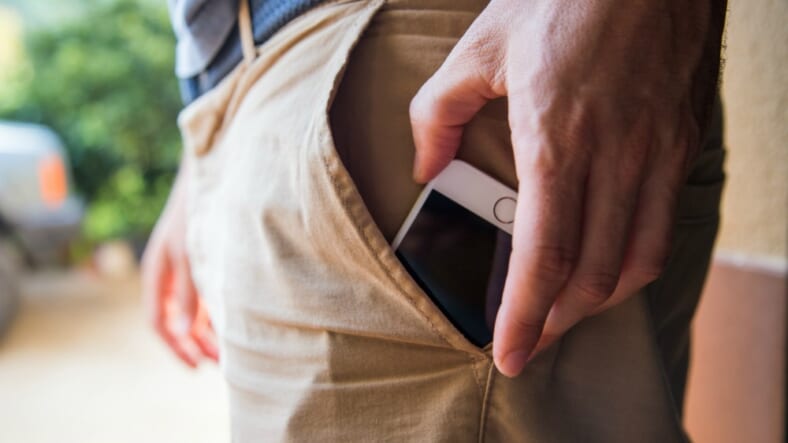 When I get home from work each day, I pour myself a large mug of wine, retreat to my room, and eat a sad dinner in my bed watching Netflix, with my laptop squarely on top of my ovaries—all while trying to shut out the mounting paranoia that I’m probably giving myself cancer, or at the very least rendering myself infertile with all of the laptop gamma rays or whatever. So you can best believe I would welcome any studies re: ovaries and computer devices.

Well, unfortunately for me and my ovaries, we don’t have that data yet, but what we do have is a brand spanking new study on cell phones and sperm levels. Published in the Journal of Reproductive BioMedicine, researchers at the Technion University in Haifa, Israel found that heavy cell phone users — guys who keep their phones in their pockets and by their bedside tables at night — saw a 47% chance of having “seriously affected” sperm levels. This, compared to just 11% of those who don’t have their cell phones close to them at all times.

According to the Telegraph, Professor Martha Dirnfeld, who worked on the study, elaborates on the possible cause: “We think this is being caused by a heating of the sperm from the phone and by electromagnetic activity.”

But should you be so quick to abandon your precious Candy Crush? Not so fast, says The Guardian. In an article investigating the legitimacy of cell phone ailments, they note:

This study involved questionnaires filled out by 106 men who had already been referred for semen analysis at Carmel Medical Centre in Haifa. That isn’t very many men, so it could easily be a chance result. Nor is it good evidence anyway, since men who use their phone a lot might also be unusual in other areas, and it might be those areas, not their phone, that are responsible.”

So the clearest takeaway here is to read the fine print on all these studies, because your sperm are probably just fine. But also maybe re-thinking your cell phone dependency probably wouldn’t be the worst idea, either.

If you need me, I’ll be slowly weaning myself and my ovaries off of Netflix.