Coast Guard Officials Are Bracing Themselves for the Next Titanic

Do you have the balls to go on this luxury cruise? 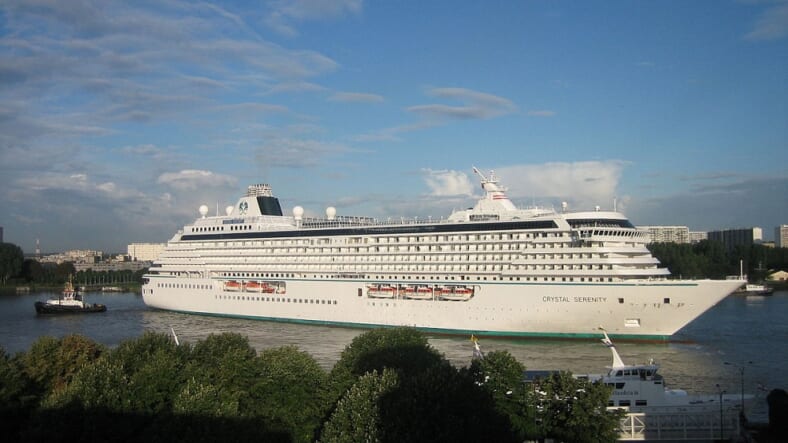 Receding ice caps have officially opened the Northwest Passage through the Arctic, permitting sea travel from the Bering Strait to New York City. Prices on cruises through the slowly unfreezing wastes on the luxurious Crystal Serenity can top $100,000. And for such a unique experience, no wonder.

But as the Guardian reported, United States and Canadian Coast Guard units are very worried about this new seafaring opportunity. They’re concerned a high-end berth on ships like the Serenity might end up on the wrong end of luxury cruise history like some kind of modern day Titanic.

So the Guardian reported that on April 13—one day after the 104th anniversary of the sinking of the Titanic, Coast Guard officials from the U.S. and Canada will buckle down to wargame for the worst possible scenario facing ships traveling through iceberg central, smaller ice caps notwithstanding:

The 13 April table-top planning exercise, involving US and Canadian coast guard and government officials, will walk Crystal operators and rescue officials through the nightmarish scenario of rescuing hundreds of passengers up to 1,000 miles from the nearest coast guard base, officials said.Communications in the Arctic are extremely challenging – cellphone reception is patchy, and there are no roads. Most of the towns along the Crystal’s route are tiny. Even Nome, which has a sizable population, has just 18 hospital beds.“We all have to be very proactive in trying to game out what we do in an emergency situation,” Lt Commander Jason Boyle, the coast guard’s prevention officer for the Alaska region, said in a telephone interview.

Those who’ve shelled out for a cabin on the Crystal Serenity (minimum price: $22,000) can take some comfort, however. The Guardian reported the cruise ship will be accompanied by “an icebreaking escort vessel carrying two helicopters” when it sets sail in August, 2016. The icebreaker will stay with the liner for the entirety of its 32-day journey from Seward, Alaska to New York City.

The fabled Northwest Passage is likely to still be cold and ice-laden even in August, but we have to admit the opportunity to survey grand Arctic vistas from the sort of accommodations even a measly $22,000 can buy sounds damned appealing. If you’re lucky enough to ever take such a cruise, pack the long underwear, a good camera, and whatever you do, do not watch any recordings of James Cameron’s Oscar-winning 1997 Titanic.

We kid. Don’t worry, it sounds like no matter what happens, the American and Canadian Coast Guard will be ready to help. (We think.)