Inside the Brutal (and Popular) World of Cockfighting

A writer goes to Puerto Rico and experiences the controversial bloodsport — and national pastime. 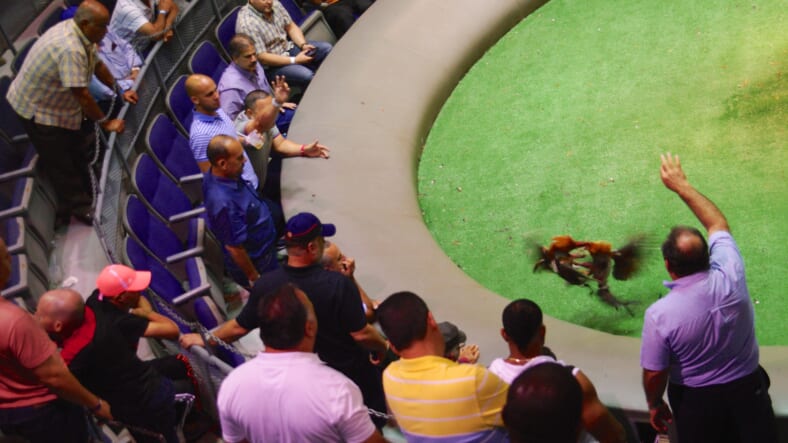 The first thing I saw when I stepped into Club Gallistico‘s 500-seat cockfighting stadium in San Juan, Puerto Rico was a five-year-old girl standing in the center of a bloodstained ring.

In front of the girl was a fluorescent blue birthday cake and, next to that, a four-piece mariachi band. On cue, the band began playing ‘Happy Birthday’ and with one huff, the flickering candles were extinguished. While the girl’s mother handed my friends and I an unsolicited slice of cake, two plexiglass cages began to lower from the ceiling onto the pit below.

Inside each box stood a bright black and red rooster, diligently silhouetted by the beaming lights above. The birthday party was over, and the night’s first cockfight was about to begin. If hosted anywhere within the mainland United States, this birthday party would have raised eyebrows. Puerto Rico, however, is a different story.

While cockfighting is illegal in the U.S — and simply attending a fight is considered a felony in 20 states — laws forbidding animal fighting do not extend to the territory, where this controversial tradition is considered something of a national pastime. In fact, in the face of pressure to outlaw cockfighting once and for all, Puerto Rico’s 78-person legislature voted in 2010 to recognize the bloodsport as “an integral part of the island’s folklore and patrimony.”

Animal rights activists, however, have a different opinion. According to Yolanda Alvarez, the Puerto Rico Director of the Humane Society of the United States, cockfighting has nothing to do with the island’s heritage. “There is nothing Puerto Rican about cockfighting, it is not unique to us…it actually started in China and Eastern Europe. Before the 18th century we never had cockfighting here.”

The few public leaders who have spoken out against the sport have faced heavy backlash. “A few years ago, one of our senators, Melinda Romero, suggested that we ban cockfighting. It was crazy. The cockfighters started to call her and call me and threaten us.”

Sen. Romero, who has since retired, is the daughter of a former governor of Puerto Rico. Despite her political pedigree, however, she was unable to sway the public. She nevertheless spoke out against the 2010 legislation that ultimately elevated and protected the practice, declaring that [cockfighting] is “abuse…it’s not a sport to me; it’s a crime.”

The cockfighters, of course, support the government’s position. “Yes, it’s a brutal sport…but this is more like a…historic act,” Mr. Genarin Cautiño said as he guided me around Club Gallistico when I returned to the arena several months later, curious if every fight began with a child’s birthday party.

Genarin was born in Puerto Rico and after long stretches living and working in the U.S. mainland, he returned to the island. For him, and many of those who frequent Club Gallistico, cockfighting is just a way of life.

“My father was a lawyer. I’m a mechanical engineer — I went to MIT. Most of us here are well-educated. I remember (as a child) us waking up at 5 o’clock in the morning and my dad saying ‘Let’s go to the cockfight.’ It’s just a part of us.”

Not only does cockfighting seem to be a large part of the Puerto Rican psyche, it’s a huge draw for tourists and island hoppers looking to explore San Juan’s stranger side before their cruise ship departs for the next port.

“This is incredible — weird, but incredible,” three tourists from North Carolina told me during a Saturday night fight. As we chatted, a pair of roosters traded increasingly intense blows. After a few slow minutes, the slightly larger of the two went on a rampage, jumping into the air and landing on his opponent. Suddenly, the smaller bird collapsed, his leg — twisted sideways — was bloodied and broken. The crowd cheered and gasped, a man with a fistful of dollars shot his arms into the air.

“We don’t have anything like this back home,” one of the North Carolinians said.

While most may conjure up images of cockfights held in outdoor dirt rings and dark back alleys, Club Gallistico is less smoke-filled room and more mini-Las Vegas casino.

The club’s distinctly circular building sits right off a main road not far from the San Juan airport, adorned on multiple sides with the word “COCKFIGHTS” in bright blue letters. For a tourist with an itch for the extreme – or simply a curious mind – the signage is pure catnip.

For others, the stadium is a home away from home.

“For most these guys, this is their hobby. They train these birds like athletes…they’re probably fed better than you or me.”

With shouts of “Kill him! Kill him!” reverberating from the stands below, Genarin brought me into a glass enclosed room where a duo of trainers prepared each bird for the fighting pit. As one man held the rooster, the other attached a plastic spur to the bottom of the bird’s foot. The synthetic spur was fastened with candle wax and cloth tape, replacing the stump where the rooster’s naturally growing talon once was with a razor sharp apparatus.

In the end, though, the artificial weapon isn’t the most critical asset in a fight.

As the fight’s winner lost interest in the lifeless bird, two waitresses in skin-tight tops delivered snacks and drinks to the shouting attendees. The crowd – mostly men, but a few women and children scattered about – chowed down on French fries and fried plantains as the announcer declared the match over.

I looked around, but despite my best sleuthing, didn’t see a slice of birthday cake anywhere.