Literally living down under. 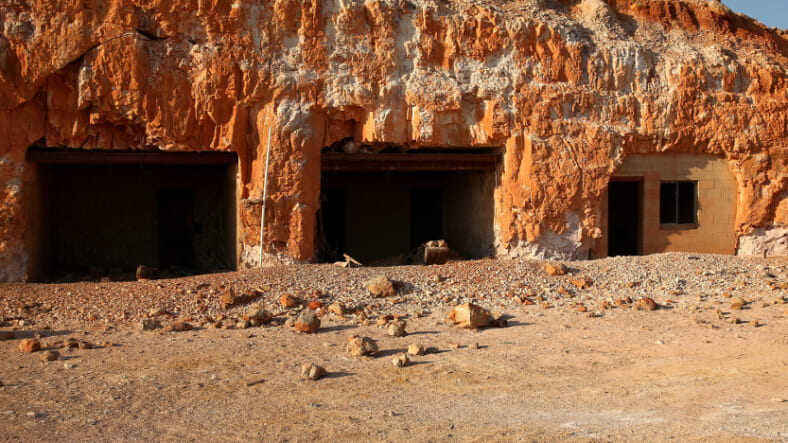 Although some futurists predict that in 100 years we’ll live in tall buildings that burrow deep underground, that movement started 100 years ago in a small South Australian Outback mining town called Coober Pedy, the opal capital of the world.Its name developed from the Aboriginal term kupa piti, roughly meaning “white man’s hole in the ground.” And for good reason: given that summertime temps can top 110 degrees, its residents (which number several thousand) had to adapt to their barren surroundings by forging “dugouts” into the ground and sides of hills, in which a much more temperate 75 degrees can be maintained year-round.

Easily the town’s most colorful and infamous resident—with an equally colorful dugout—was Arvid von Blumental, known for decades to locals and tourists alike as “Crocodile Harry.” He was reputedly a Latvian baron, Waffen SS trooper and, yes, actual crocodile hunter. He decorated his underground home with women’s underwear and a wide variety of drawings and assorted paraphernalia. K.

If you’d like to “live like a local” by staying underground, both the Desert Cave Hotel and Lookout Cave Underground Motel can accommodate you. They look more refined than they sound. In fact, they pretty much appear to be regular hotel rooms…except with sandstone walls and no windows.

Beyond merely sleeping in the sub-strata, you can socialize as well. Why not have a drink and shoot some pool in the Desert Cave’s underground bar?

When you’re ready for a surface activity, head just a couple miles outside of town to hit the uniquely all-dirt Opal Fields Golf Course—the only club in the world with reciprocal rights to St. Andrews. The greens fee includes borrowing a set of clubs on the honor system, along with your own little private piece of artificial turf to carry around and play from.Speaking of which, since there is no grass, they soak a designated area with oil, so you have something visible to shoot for. And if you happen to find any opals along the way, they’re yours to keep. How many other courses let you keep the gems you find?Special tip for golfers looking to save a stroke from their game—namely heatstroke—they also allow foursomes to play during the cooler climes of nightfall.

When you’re done with your round, you’re bound to be peckish. So it’s time to retreat back down to the Underground Restaurant.  More than just a novelty, it actually looks like they offer a decent menu and lovely atmosphere.

Umoona Opal Mine from Turbo Productions on Vimeo.

Of course, while you’re there, you may want to learn a thing or two about the opal that made the town famous (other than appearances in Mad Max and other movies). That requires a trip down to the Umoona Opal Mine and Museum.And along similar lines, if you happen to be down that way this coming weekend, you’ll certainly want to attend the annual Opal Festival and Gem Trade Show events. Both shining examples of what makes Coober Pedy itself a rare, albeit dusty gem.