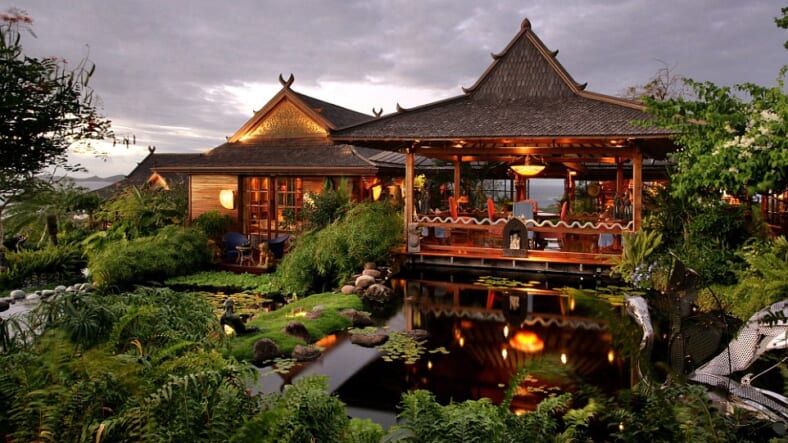 Aside from being a musical genius, the late, great David Bowie was also a man of extreme wealth and superior taste. And now you can get a firsthand glimpse of Bowie’s private world if you’re willing to shell out at least $40,000 a week for one hell of a Caribbean vacation.

That’s how much it costs to rent his $20 million, five-bedroom vacation retreat on the posh island of Mustique, which he built 30 years ago, the London Daily Mail reports. The Indonesian-style Mandalay Estate, on 6.2 acres of land, was recently purchased by British multi-millionaire entrepreneur and Bowie superfan Simon Dolan.

Bowie once described the estate as a “tranquil place” that was so relaxing he found it difficult to write music there. Each of the main residence’s five bedrooms are all individually named and have their own private veranda leading to the pool. In high season the rate jumps from $40,000 to $70,000 with a minimum seven-night stay.

The property, designed by Swedish architect Arne Hasselqvist as a series of pavilions, also features lush tropical landscaping, several sizable reception rooms, a dining pavilion, a games room, a card room decorated with mussel shells, a studio with a bamboo ceiling which Bowie used to record in, a stage for musical performances, a study and an Infinity pool overlooking the coast.

In addition to the main property, Mandalay Estate is also home to The Writer’s Cottage which provides guests with “first-class self-contained, open plan accommodation” away from the main villa. Dolan has done little to alter it from when Bowie was in residence, other than to upgrade some of the furnishings.

Bowie’s estate stands along with around 80 other houses on the ritzy West Indies island. Other celebrity inhabitants include Mick Jagger, the Duke and Duchess of Cambridge and Top Gear troublemaker Jeremy Clarkson. Facing west, the property is perfectly positioned for guests to enjoy the mesmerizing Mustique sunsets and white sandy beaches, the paper notes.

Anybody wanna go in on the weekly rent with us?