Jolt Cola Is Making a Comeback, So Don’t Expect to Sleep Anytime Soon

The original energy drink has “all the sugar and twice the caffeine.” 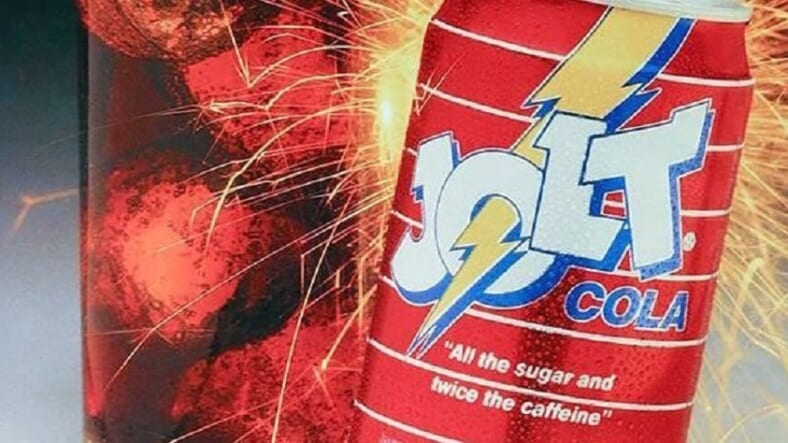 Long before millennials were slamming Red Bull, Monster, or popping Adderall, there was Jolt Cola, with “All the Sugar and Twice the Caffeine.”

Jolt thrived for years as a fave of cramming students, gamers and computer programmers. Then it vanished in an ever-expanding sea of heavily-caffeinated sodas.

Geek.com reports that’s about to change. Jolt is coming back, big time:

Here’s even better news: It isn’t coming back as a pricey boutique soda or an impossible-to-find promotion (I’m looking at you, Pepsi Perfect). You’ll start seeing cans of JOLT Cola appear at Dollar General stores September 21.

They’ll be available in 10,000 of Dollar General’s 14,000 stores across the country, though pricing hasn’t been announced. Hopefully it’s a dollar. Also, according to the JOLT representative I talked to, it will have sugar and not corn syrup.

That’s no small amount of distribution.

If the growing market for retro-gaming favored by 80’s and 90’s kids is any indication, Jolt has picked the perfect time to come screaming back into our brains.

What the hell kind of sense would it make to play games on your Mini Super Nintendo Classic all weekend without a case of Jolt on hand to keep you going?

Also, let’s hope we get more awesomely weird commercials for the stuff like the one in the video below.