Escape To An Island Paradise With Luxury Beachfront Villas

There’s a reason why they call it “Paradise Beach.” 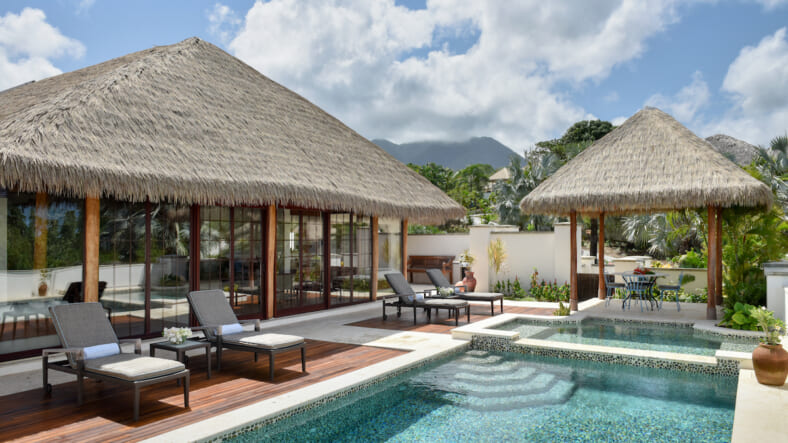 It’s an unspoiled Caribbean idyll that’s a favorite vacation spot of notables ranging from Jay Z and Beyonce to Canadian Prime Minister Justin Trudeau. And now the remote island of Nevis, a West Indies hideaway nestled near St. Kitts, has a luxurious new property to get lost in.

Of course, you’ll probably want to spend much of your time lazing about the property’s pristine private beach.

This perfect stretch of beach has cabanas, thatched umbrellas, hammocks and a bar made from recycled Heineken bottles that serves up local Carib beer, rum punches and plenty of sunscreen to guard against the scorching tropical rays.

Nevis, a 36-square-mile island about 50 miles west of Antigua, was discovered by Christopher Columbus in 1498, but the former British colony is perhaps best known as the birthplace of Alexander Hamilton. Lin-Manuel Miranda, creator of the smash Broadway play Hamilton, even stayed on the island to seek inspiration while writing his acclaimed Pulitzer-prize winner.

Dubbed the “Queen of the Caribbean,” Nevis has lots of wild flora and fauna, wandering livestock (cows, goats, donkeys) and Green Velvet Monkeys which inhabit the dormant volcano Mt. Nevis, a towering peak where intrepid tourists do rainforest climbs aided by ropes, roots and a genial guide named “Baba.”

If scaling mountains isn’t your thing, take a leisurely catamaran tour that launches from the Four Seasons Nevis and includes snorkeling amid schools of iridescent fish. Beforehand, fuel up on grilled lobster tails and jerk wings at popular beach shack Sunshine’s (look for Jay Z and Beyonce’s photo on the wall) which serves the island’s most potent rum punch, the dangerously tasty Killer Bee.

Those who don’t want to stray from the posh confines of Paradise Beach can hire the property’s private chef to cater a villa with local specialities like johnnycakes, salt cod fritters and exotic fruit juices. There’s also a butler, concierge, massage therapist and on-site yoga instructor.

But the real reason to visit Paradise Beach is to not do much at all, aside from hanging out on the beach and inhaling the sweetly florid ocean air with your toes in the sand.

After all, they call it “paradise” for a reason.