It came from the depths of the sea. 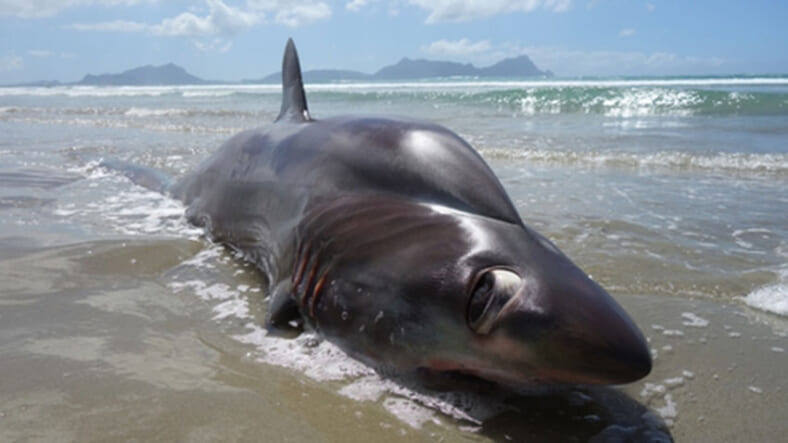 The bigeye thresher shark looks like it was invented by hellish forces, with plate-sized eyes and a hump on its back that may well hold a reserve supply of soul-stealing, carnivorous evil, for all we know. So—when Czech tourist Martin Stehlik encountered one on a Whangarei, NZ beach while there with his uncle George Plesky, he was probably a little taken aback.

As reported by the Northern Advocate, Plesky and Stehlik initially had no idea just what to do:

“It was just so strange and we’d never seen anything like it before, with its long tail and it’s big, black eyes. It was very unusual. Martin thought it might be a shark that isn’t seen here often. He’s going to go away with some very good memories of his time here,” Mr Plesky said.

Clinton Duffy, a shark expert who works for New Zealand’s Department of Conservation, told the Advocate that Plesky and Stehlik had encountered a “quite common” breed of shark, but one that is “rarely seen due to their offshore habits.”

Fortunately for anyone sharing the waters in which thresher sharks thrive throughout the world, they apparently don’t spend time eating or even draining the souls of human divers and seamen. According to Duffy, the thresher is perfectly content to “feed on small schooling fishes and squid.”

Biologists claim threshers actually pose no danger to humans. Except maybe to a good night’s sleep after getting a close look at one.