This is the real deal. 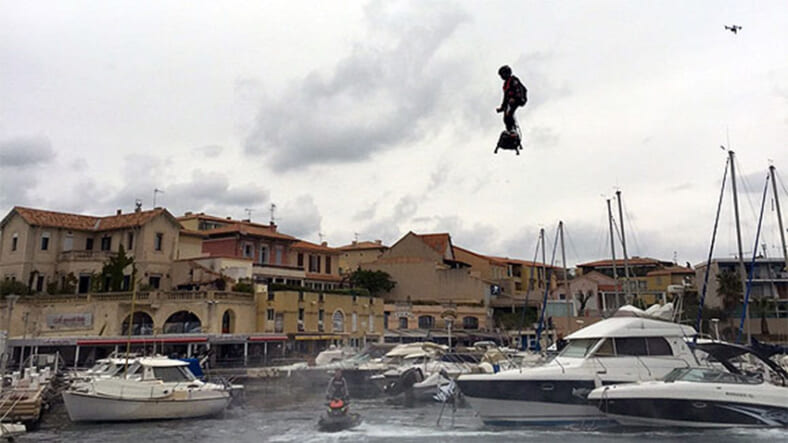 We’ve been reminding you for some time that the electric two-wheeled scooter marketed — until recently — in the US as a “hoverboard” wasn’t a hoverboard at all. It was a scooter — one that developed a rep for spontaneously bursting into flames. French daredevil Franky Zapata, however, did manage to put together a real hoverboard. And according to Guinness World Records, Zapata set “set a new a new Guinness World Record title for the farthest hoverboard flight” on Saturday.

The Associated Press (via the New York Times) confirmed the record:

… [A] Guinness World Records official was on hand for the flight and determined that it beat the previous record of 275.9 meters (905 feet) by Canadian Catlin Alexandru Duru last year.

The 37-year-old Zapata flew for more than a mile on his Flyboard Air at a height of roughly 165 feet. Zapata, a jet ski champ, runs Zapata Racing, the company that developed the Flyboard.

Zapata Racing’s device was allegedly taken for an easy run. Guinness reported the device “can reach a claimed maximum height of 10,000 feet, with a maximum speed of 150 kilometers per hour (93 miles per hour).”

The world record might be satisfying for Zapata on many levels. He released an impressive video demonstrating a version of the Flyboard Air in early April. While it went viral, it also prompted predictable accusations it was a fake.

Now we just want to know: When can we get our hands on one?