Laser-Shooting Jets and Drones Are The Fearsome Future of Warfare

Prepare for a brave new world of high-tech dogfights. 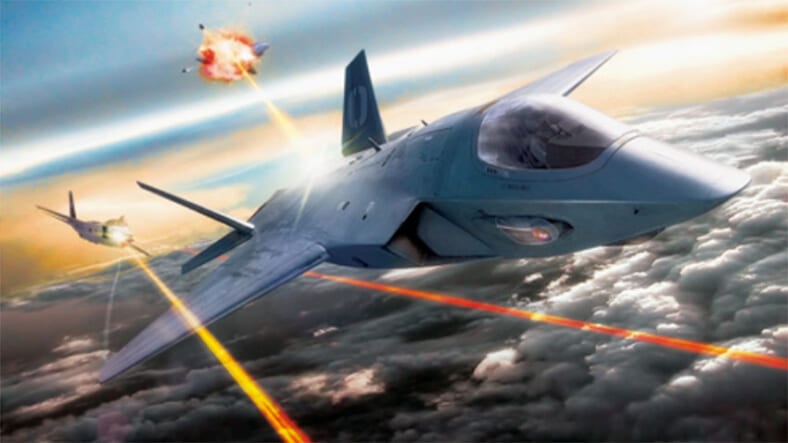 A vision of nimble airborne fighters spitting laser fire as they soar into battle immediately calls to mind images from science fiction. If the Air Force stays on course with its plans for jets and drones in the coming decade, those sci-fi-style images will become reality.

A report from Scout.com’s Warrior blog indicates that the United States Air Force has concrete plans to arm tactical UAVs and fighters with laser weaponry. Not targeting lasers, not blinding lasers — lasers that can slice through an enemy tank or fry an enemy fighter with the push of a button.

Warrior spoke with Dr. Greg Zacharias, the Air Force’s top scientist. He said that part of the “promise” in using lasers — “directed energy” in military speak — “is that electricity is cheap.”

Zacharias continued on to say that “Plus, you get the speed of light working for you so incoming missiles are easier to shoot at.”

Scout reports the laser program is planned to launch in some fashion in 2023, with tests beginning by 2021. To Warrior, Dr. Zacharias admitted that the Star Wars-like weapons advances face challenges and may lead to sacrifices. “You are going to give up fuel or some armaments,” he said, “It is not just getting enough power on board(,) it is getting the aiming technology. Its dealing with turbulent air flow on a high-speed platform.”

Early laser weapons will likely be added to the Air Force’s largest planes, such as the C-130 Hercules. While they receive testing on those platforms, military technologists will tackle trimming the necessary equipment down to fit it to fighter jets such as the F-16 and F-35. Developing laser weapons for manned fighters will inevitably lead to similar weaponry on tactical drones.

Even with the near-future promise of laser-firing drones, Zacharias confirmed that the Air Force will maintain the need for a human on hand to make decisions about using such a precise and deadly weapon. “There will always be some connection with human operators at one echelon or another,” he told Warrior, “It may be intermittent, but they will always be part of a team.”

It’s enough to almost make us feel bad for whoever first faces that lethal light-speed bolt from the sky. But only almost.