It’s only a matter of time before this billionaire car nut gets horribly mauled. 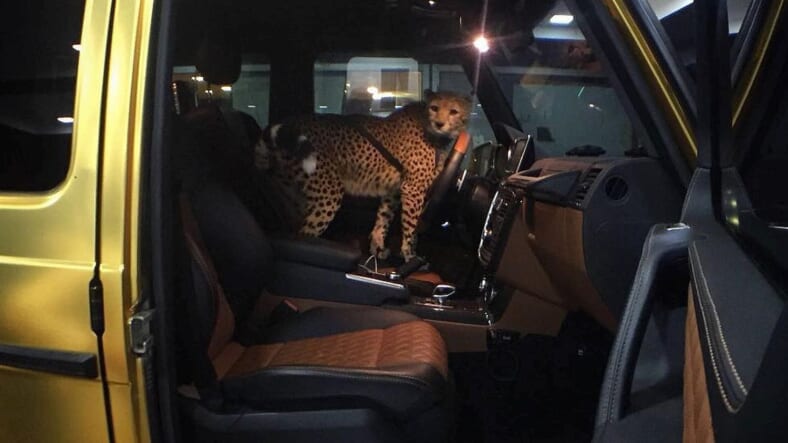 A billionaire Saudi playboy has been kicking up a ruckus driving around London in a fleet of gold-plated supercars – sometimes with a live cheetah riding shotgun.

Turki Bin Abdullah, who is said to be related to the Saudi Royal Family, just shipped more than $1.5 million worth of cars – including a gold-plated Range Rover, Mercedes AMG G63 AMG 6X6, Lamborghini and Rolls-Royce – to London to escape the heat of his homeland, the London Sun reports.

In addition to the streets of Knightsbridge, he’s also been burning up social media with photos and videos of his insanely extravagant antics. In one clip (below) he can be seen chasing a camel down a desert slope in a $500,000-plus six-wheel Mercedes G63 AMG 6X6 – Dan Bilzerian’s ride of choice.

Another clip has him driving his $500,000 gold-plated Lamborghini Aventador SV in West London while his friends follow in an another gaudy supercar. And in one photo the bemused pet cheetah is strapped into the driver’s set of the AMG 6×6.

Bin Abdullah also owns a gold-wrapped Bugatti Veyron. He and his pals have been racking up a ton of parking fines, but they’re unlikely to make much of a dent in his bank account.