“I Got Locked Out of My Friend’s House, So I Went Next Door and Had Sex With Her Neighbor”

Sometimes, bad luck can get you lucky. 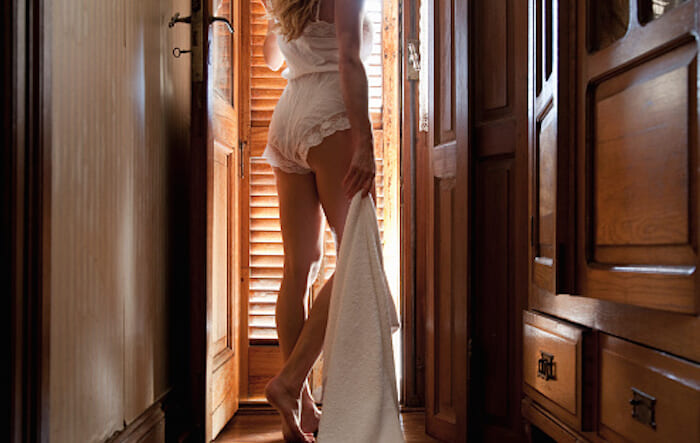 Ever have a story so hot it would be wrong not to share it with the rest of the world? We’re here to listen. Each week, we’ll bring you tempting tales from our readers that will definitely keep you up all night—in the best way possible. This time, Becky* tells us about the time a little mixup led to a night she’ll never forget.

Okay back up. What were you up to that night?I was staying with a friend in another city. We had a fun night out with a bunch of mutual friends, but she was really tired and decided to go home early. I was having a blast, so I stayed out.

What happened when you left the bar?Well I was going to call her when I got back, but my phone died. I didn’t think it was a big deal, because I thought she would answer if I knocked.

But she wouldn’t let you back in?When I got back, I banged on her door for a while, but she didn’t answer. I eventually just gave up and sat on her porch for a while. I didn’t know what else to do.

So you knocked on a stranger’s door? That seems a little risky!I thought it’d be safer then falling asleep outside! Technically, he was a stranger to me, but my friend had told me she was casually friendly with her neighbors, so I figured it’d be relatively harmless. I knocked, and was really surprised when this cute guy answered the door.

Sounds like you got lucky! Then what happened?I said I was sorry for waking him up, then explained what happened, and asked if could I sleep on his couch. He was super cool about it, and invited me in. Apparently he had been awake anyway, just hanging out and playing guitar. I sat on his couch and he poured me a drink.

Did you immediately start hooking up?Actually, not at all. We talked for a while and he asked me why I was in town and where I was from. He was really down to earth. I’m not sure if we were flirting. We were just hanging out and laughing. Eventually he just leaned over and kissed me.

Nice! How did you respond?I was totally into it. I remember pulling him closer to me, grabbing his shirt, and getting on top of him. I wasn’t being shy. I started unbuttoning his shirt, he took mine off over my head, and it was on.

That sounds really hot. What was going through your mind?Not a lot honestly. It was just fun physical lust and some liquid bravery. I knew I wanted him, and he wanted me, so there really wasn’t a question about it. I just made it happen!

Okay, but now for the most important question. How was the sex?It was amazing and so spontaneous. I felt like I was in another world — it’s honestly a blur. But I remember it felt amazing and we changed positions a lot — me on top, him on top, spooning me from behind. We were just laughing, pushing each other around and having so much fun.

So you stayed over. Then what happened the next day?He was super chill and made a pot of coffee. We sat outside and were just laughing about how crazy the night was. My friend must have heard us outside and came out. She was like “What happened last night?! You never came home?” and I explained to her what happened and how I ended up at his place instead. She was just shaking her head and laughing at the same time. It was crazy and totally random, but she knew it was fun for me, so it was all good!