There’s a Totally Ridiculous Sex Move Called ‘Grapefruiting’, And You Best Learn All About It

“When you grapefruit your man, it’s going to feel as if you’re giving him head and f*cking him at the same time.” 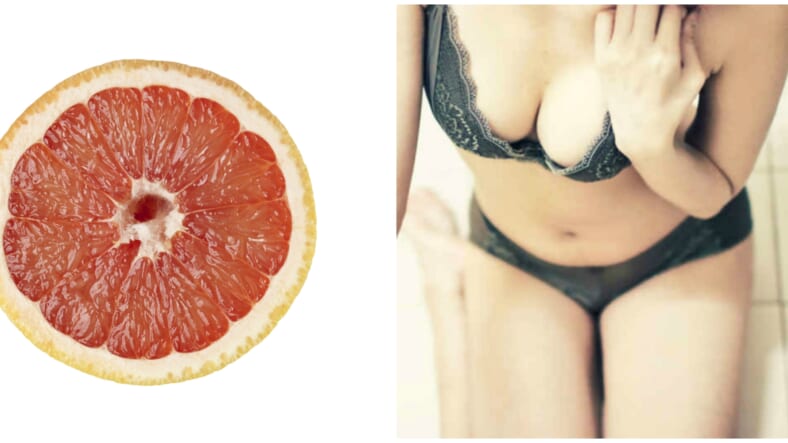 If you’ve never even heard or thought of anything like this before, you’re not alone. I didn’t even know this was a real thing. However, this kinky sex act, known as “grapefruiting,” is actually kind of common.

“I believe every man should get grapefruited,” Auntie Angel says, encouraging all the ladies out there to grab a grapefruit, cut a hole in it, and slip it over their man’s dingdong.

“When you grapefruit your man, it’s going to feel as if you’re giving him head and fucking him at the same time.”

Hmm…despite how great that must be, I’m not sure how my dude would respond if I were to suggest I fuck him with a grapefruit. Would he be turned on by the thought of getting off from a citrus fruit? Or would he promptly dump me?

Anyway, just why is grapefruiting a topic of discussion now, over three years after the video was released? Well, it’s because the new feel-good comedy, Girls Trip, has a scene where comedian Tiffany Haddish teaches Jada Pinkett-Smith how to grapefruit her new boo, and when people saw this scene, they thought: “Jesus H. Christ. That’s hilarious…and might actually feel good. I wonder who came up with this ungodly technique.”

Well, who was it? Was it Tiffany Haddish, or was it Auntie Angel?

“I felt like she was stealing moves from me, because I’ve been doing that since, you know, 2002,” Tiffany Haddish said in an interview with Essence.

“I told her about my shit. If she wants to teach the world, then teach the world. I talk about it on stage, I’ve done jokes about it for years, but she demonstrated it.”

Well, considering there’s no evidence to support Haddish’s claims that grapefruiting is her thing, and because Auntie Angel’s video came out in 2014, she can keep her crown as the OG grapefruiter.

In conclusion, my friends, it would seem as though grapefruiting is an actual thing, and should you ever want to try it out, just know that Auntie Angel would be proud of you.