This sure ain’t your pappy’s pup tent. 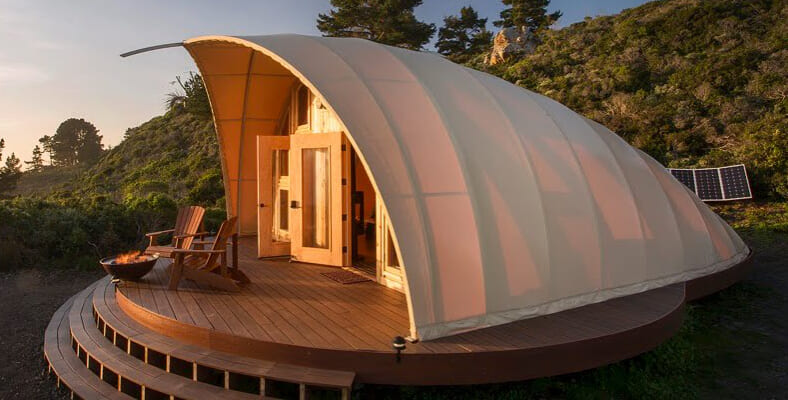 Although originally intended to be seasonal, these ultra luxurious tents (given how amazing they are, it feels kinda weird calling them that, but they are) can be enjoyed year-round. Their frames consist of laminated beams, steel or aluminum tubes, resting on a raised wooden deck and enveloped by a high-tech mildew, rot and pest resistant translucent fabric.Make no mistake, even though this environmentally low-impact abode doesn’t require a foundation, it’s sturdy as hell. In fact, it’s engineered to stand up to serious snow loads, lashing rains and hurricane force winds.

Of course, its interior design is at your whim. But it is able to integrate with existing electricity, gas, water and sewer systems, should they be available. In more remote locations, other accommodations can be made, such as a small solar array to power lights, hot water, composting and a filter system that safely returns shower and sink water back to the natural landscape.

Able to be raised in just a few days and “leave without a trace,” the Autonomous Tent comes in two varieties: the Cocoon studio (700 square feet, $100,000) and multi-room Tipi (1,000 square feet, $200, 000).Now all you have to do is find the most picturesque possible spot for one of these and have it shipped there.