9 Secrets To A Long Life, According to the World’s Oldest People

Here’s a hint: It starts with a trip to the liquor store. 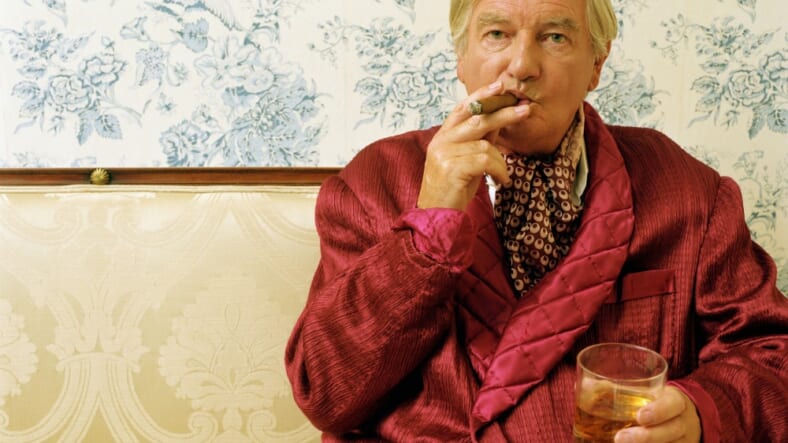 What you’re about to read may not seem like good advice, but these old-timers basically all lived to be historic landmarks, so they’re obviously doing something right. Their secret? Lots of booze, cigarettes, delicious food, and more booze. Follow the golden secrets of the world’s oldest people to live your best life.

Bacon all the time.Susannah Mushatt Jones eats bacon every morning, and she’s still ticking at the ancient age of 116. But it should come as no surprise that bacon—a food so delicious, it was probably brought down from heaven on the back of a Pegasus—turned out to have invigorating, anti-aging powers.

Chocolate, wine, and cigarettes.French centenarian Jeanne Calment, the oldest person ever recorded, lived until the super old age of 122. How, you ask? By eating 2 pounds of chocolate a week, drinking port wine, and smoking lots of cigarettes. Of course, the key to a long life is a classically romantic Parisian lifestyle.

Beer at 3 p.m.Every afternoon at precisely 3 o’clock, Mark Behrends cracks open a cold one, and lets the delicious brewsky fill his 110-year-old body with life, claiming it’s the only medicine he needs. I know what I’m doing at 3 p.m. from now on.

Plenty of alcohol.Pauline Spagnola, who just turned 100 this past summer, says the secret to her longevity is “a lot of booze.” Good news college kids! You’re going to live forever.

Spiked coffee and 12 daily cigars.According to America’s oldest veteran, 109-year-old Richard Overton, nothing says good morning like a strong cup of coffee, complete with cream, sugar, and a nice shot of whiskey. He also says he’s smoked 12 Tampa Sweet cigars every day, ever since he was 18. God bless America.

Three beers and a shot of whiskey a day.Agnes Fenton, who turned 110 in August, says she’s been drinking three Miller High Life beers a day for years, after her doctor “prescribed” it for a benign brain tumor a long time ago. Now that’s my kind of doctor. Adding a shot of whiskey to the mix was self-prescribed, but we guess it coudn’t hurt….

Delicious food.Misao Okawa, formerly the world’s oldest person at age 117, told The Japan Times that her secret was “eating delicious things,” like ramen noodles, beef stew, hashed beef, and rice. Basically, tell your nutritionist to stuff it, and eat all your favorite foods and you’ll live way longer than anyone ever expected.

Avoid men.At 109 years old, Jessie Gallan of Scotland revealed the ultimate secret to cheating death– avoiding men. After leaving home to become a milkmaid at age 13, Jessie declined to get married. “My secret to a long life has been staying away from men,” she says. “They’re just more trouble than they’re worth.” Wise words.

Will I live to see my 110th birthday if I shotgun 4 beers, shoot tequila from someone’s belly button, and smoke a pack of cigarettes a day? Probably not. But it’d be hella fun, and if there’s one our elders can teach us, it’s how to live life boldly and without apology, no shits given.