It was wilder than you ever imagined… 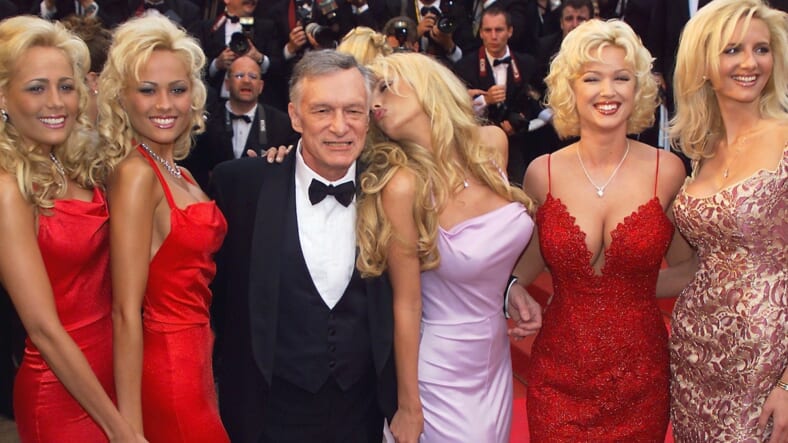 As one would expect from a recently deceased 91-year-old man survived by his 31-year-old Playmate wife, Hugh Hefner‘s sex life was anything but ordinary.

The legendary Playboy founder and icon of ’60s free love and hedonism revealed in a 2010 interview with The New York Times that he was a diehard champion of Viagra.

“I make love a couple of times a week, and I take the Viagra when I’m going to be making love,” he continued. “I would say at 84 it helps. It’s God’s little helper.”

But how Hef made use of his favorite boner pill was far more interesting. Former girlfriend Kendra Wilkinson, of The Girls Next Door fame, memorably recalled the first time they hooked up in her memoir.

One of the girls asked me if I wanted to go upstairs to Hef’s room… It seemed like every other girl was going, and if I didn’t it would be weird. One by one, each girl hopped on Hef and had sex with him… for about a minute.

I studied their every move. Then it was my turn… it was very weird. I wasn’t thinking about how much older Hef was—all the body parts worked the same. I wanted to be there.

Hef just lies there with his Viagra erection. It’s just a fake erection, and each girl gets on top of him for two minutes while the girls in the background try to keep him excited. They’ll yell things like, ‘fuck her daddy, fuck her daddy!’ There’s a lot of cheerleader going on!

The main girlfriend wipes off his [uncondomed] penis. She’s the girl who actually shares the bed with him. She sleeps there all night. She’s around 22 years old. He uses all the same girls. She’s been there for three years now…

When it first gets started his main girlfriend gives him [oral sex], then she has sex with him. She’s the first to go because that’s the safest for her. No protection and no testing. He doesn’t care.

Meanwhile, tons of tributes poured in Thursday from adoring celebs who bid farewell to the publishing icon and his lusty legacy.

Hugh Hefner was a GIANT in publishing, journalism, free speech & civil rights. He was a true original, and he was my friend. Rest well Hef. pic.twitter.com/bJ1wxoK4gR

We’ve lost a true explorer, a man who had a keen sense of the future. We learned a lot from you Mr. Hefner. #HughHefner

RIP #Hef Thank you for being a revolutionary and changing so many people's lives, especially mine. I hope I made you proud. 😓#PMOY 94 ❤️ pic.twitter.com/sF9ARYgEpw

RIP to the legendary Hugh Hefner! I’m so honored to have been a part of the Playboy team! You will be greatly missed! Love you Hef! Xoxo

To the Playboy of all Playboys. What a way to live life and not let life live you. Enjoy the ride! Dale! @Playboy pic.twitter.com/x1GCGhCBkk

May Heaven be an endless supply of Viagra and clip-on bunny ears. Rest in peace, Hef.