Sometimes, you’ve gotta take some risks to slide into home. 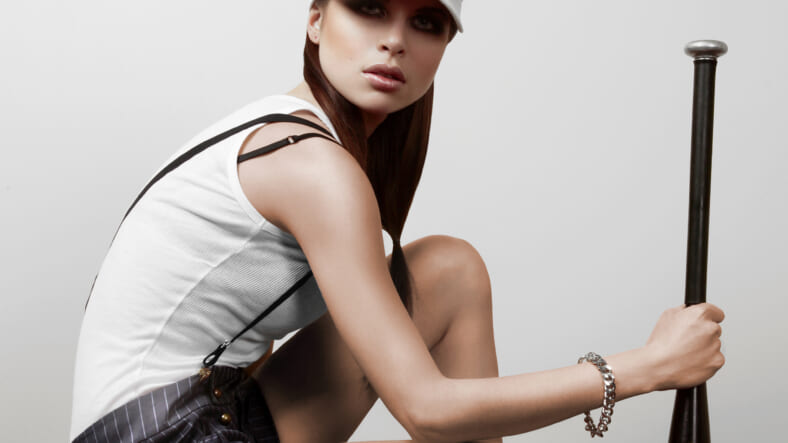 Ever have a story so hot it would be wrong not to share it with the rest of the world? We’re here to listen. Each week, we’ll bring you tempting tales from our readers that will definitely keep you up all night—in the best way possible. This time, Lindsey* tells us about the time she ran all the bases…while on the run from the cops.

Hot! And dangerous. How did that start?Well, my boyfriend and I decided to drive to a private park and go for a walk. It was really pretty there, with a lake, playground, baseball dugout, and all kinds of sights. It was after hours, so we weren’t allowed to be there, but we figured that walking around would be pretty harmless.

That’s innocent enough.We had no intention of hooking up there, but as we were walking, we started flirting and kissing, so decided that we’d head back and have sex in our car. But once we got closer to the parking lot, we saw a cop car parked right next to ours.

Whoa, what did you do next?We hid behind some bushes for a minute, and then saw flashlight in the dark, so we knew he must have been looking for us. We were the only car there! So we ran in the opposite direction.

Your heart must have been racing! Where did you go?It was! We were really nervous we’d get caught. We ran to the baseball field and hid in the dugout. But we still wanted to have sex!

Ha, fair.We were really excited and had this adrenaline rush. My boyfriend whispered to me “I want you right now” and just pulled me on top of him. We started making out and just ripping each other’s clothes off.

Straight to the action!Exactly! We were already excited about it, so as soon we got the chance, we just jumped on it. I started off by straddling him, and then he pushed me off and laid me down on the wooden bench. At one point, he even bent me over it!

That must have been such a rush.I was just so crazy excited. I was nervous about getting caught, but it made it that much more exciting. We were totally lost in the moment.

What happened after?We waited there for a few more minutes and then got our things together before we walked back to the car.

Did you run into the cops again?We were on the lookout, but luckily, the officer wasn’t around anymore and his car was gone. We drove home and were laughing the whole way. We both had tons of splinters when we got home — but it was totally worth it! It’s still one of my favorite stories to tell today.

*Names have been changed