What happens in Paris stays in Paris. 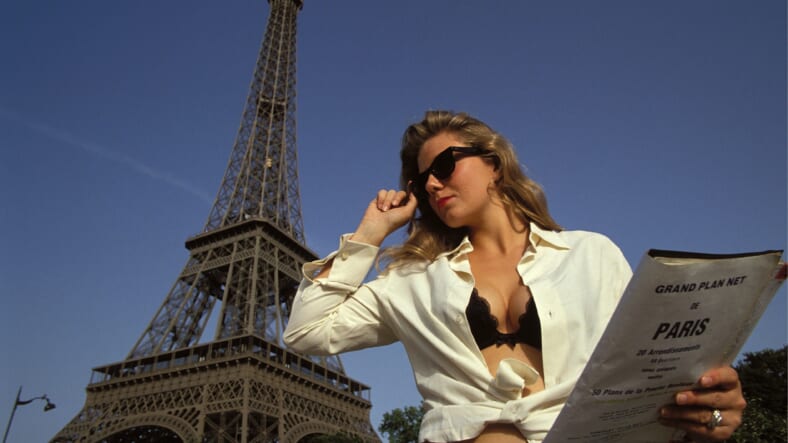 Ever have a story so hot it would be wrong not to share it with the rest of the world? We’re here to listen. Each week, we’ll bring you tempting tales from our readers that will definitely keep you up all night—in the best way possible. This time, Natalie* tells us about the time she went on vacation to Paris and left her inhibitions at home.

That sounds like a pretty good vacation! How did that happen?My friend and I were in Paris for the weekend, and took a walking tour of the city. On the tour, I was standing next to this cute guy. He starting telling me cool things about the city that weren’t mentioned on the tour. It was a cheesy way to start talking to me, but it was really cute.

Hey, sometimes cheesy pays off. Were you guys flirting?We were definitely into each other, and made a plan to meet up later that night at a bar crawl. That’s when we really started to get flirty. We had a drink at the first bar, then he bought me a drink at the second bar. At the third bar, I could really tell he was into me. By the fourth bar, we were all over each other.

Of course he would be all over you! When did it start to get hot?At the last bar, he bought us tequila shots, grabbed my hand, and took me to the dance floor. He pushed me up against the wall and started making out with me. I was really surprised, but I just went with it. It was so hot. We were dancing, kissing, and having so much fun together. We stayed until the bars closed!

Did you know you were definitely going home together?Well once we left the bars, I didn’t want our fun to end. So I invited him back to our hostel, where we were staying in a shared room with a bunch of strangers. I figured it might be a little awkward, but my friend was totally cool with it, and I really didn’t care if random people heard us hooking up. I would never have to see them again.

Plus, you’re on vacation! Anything goes.Exactly! I was just feeling it, and nothing else mattered. As soon as we got back to the hostel, we went into the bathroom. We were making out all over the bathroom — against the walls, on the sink, against the shower door – and eventually I started going down on him. By the time we finished, we figured that everyone must be asleep. So, we went back into the shared room.

Even if they were asleep… I’m sure you woke them up.We tried not to… but I was drunk, so who knows? We started hooking up again in bed, and he started taking off my pants. I was afraid I was going to be too loud if we had sex, but it was really hard to resist. We hooked up as much as we could while trying to stay quiet. He loved what I was doing, and I was really into it too.

Did anyone hear you?The next morning, the other people in the room didn’t say anything at all. They left pretty early… but maybe they left because of what happened. My friend said we were pretty noisy, but she was totally cool with it because we were on vacation. We both knew it was a once in a lifetime experience.

Now that’s a good friend! Did you keep in touch with the guy?We exchanged numbers and talked for a couple days, but it just wasn’t the same. We had a passionate whirlwind romance, like something from a movie. We wanted to re-live it, but it just wasn’t possible. So, we lost touch. But I couldn’t stop thinking about it for weeks afterward. I still get giddy when I think about it!

*Names have been changed