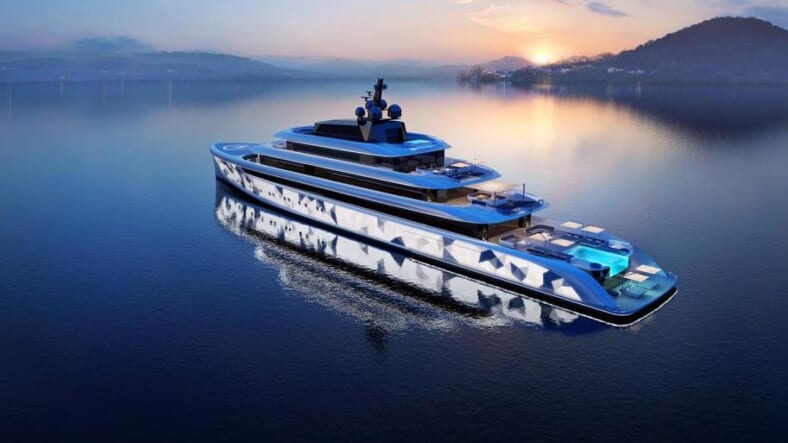 It might appear to be covered in some sort of high-tech camouflage, but the 295-ft. Moonstone superyacht concept from Oceanco and Van Geest Design is anything but hidden in plain sight.

The extravagant new vessel features a multifaceted hull that sparkles like a diamond as it captures the reflection of the sun on the water, the London Telegraph reports.

But that’s just the beginning. When darkness falls thousands and thousands of solar-powered LEDs embedded in the facets activate to put on an incredible light show that can be controlled via an iPhone app.

There are infinite possibilities but for one example the app can use the phone’s camera to capture a Caribbean sunset and portray the same colors on the side of the ship in startling mimicry – and in fact somewhat camouflaging it from view.

Moonstone will feature a gym and spa, swimming pool, Jacuzzi, cinema and helicopter pad, as well as a full-floor owner’s suite.

The yacht will have a projected top speed of 18.5 knots and a PYC classification meaning it would be permitted to carry more than 12 guests.

Get your deposit in now if you’re jonesing for this camouflaged wonder – it’ll take approximately three years for the vessel to be built at Oceanco’s facility in the Netherlands, with a price easily topping $200 million.