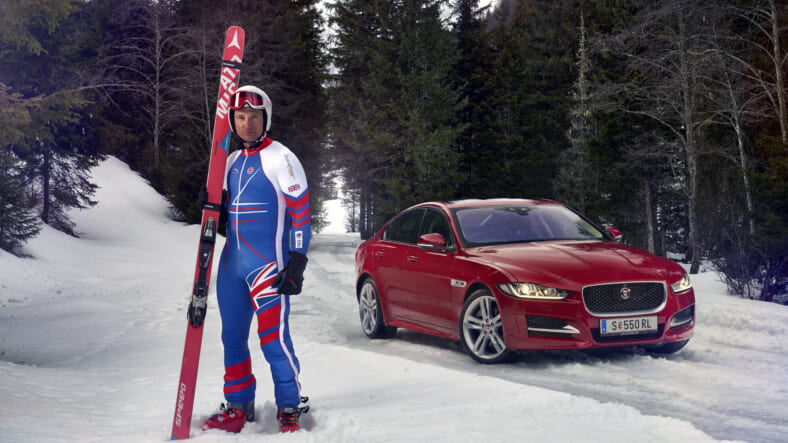 British Olympic ski jumper Graham Bell is already ranked as one of the fastest skiers in the world. But now he’s aiming to break the world record for the fastest man on skis with the help of a Jag and some jetpacks. Bell and Jaguar just announced they’re going to try and hit 160 mph, shattering the current record of 158 mph set during a downhill race in 2014.

In concert with Jag’s engineers Bell is developing a special skis and a harness with built-in mini-jetpacks that will be deployed after a certain speed, allowing him to break the record under his own power. Wearing a special racing suit he’ll be towed behind a brand new a Jaguar XE AWD at the marque’s cold weather testing facility in Sweden.

“I approached Jaguar to become my lead technical partner due to their experience in aerodynamics and love of all things involving speed,” Bell says. “[They] will provide the aerodynamic expertise to develop the Iron Man-style suit I need, as well as helping me acclimatize to speed and external forces using high performance vehicles including the Jaguar XE AWD – designed to provide maximum traction in adverse conditions including snow and ice.”

He’s been practicing by “ski-joring” at up to 100 mpg while being towed by the XE AWD in the Austrian Alps. “In many ways, it’s very similar to the car design process,” notes Ian Anderton, thermal and aerodynamics manager for Jaguar Land Rover, “necessitating the perfect balance between aerodynamics, engineering and design for ultimate performance.” Best of luck, guys.