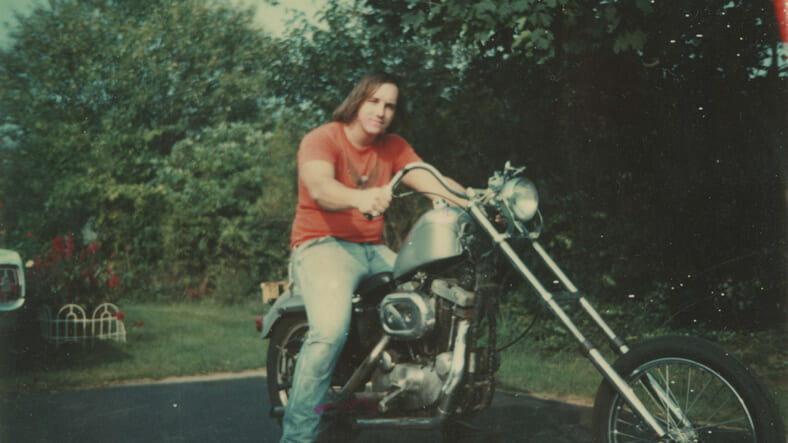 The book, which features a foreword by MMA legend Renzo Gracie, details Bradshaw’s journey from One Percenter biker to an unlikely career as a decorated undercover narcotics cop for the same New Jersey police department that had once arrested him.

Here, in an exclusive excerpt from the book, Bradshaw visits a Jersey club called The Alamo in 1977 with a fellow Pagan, gets into a bloody brawl with rival bikers, and begins to question his criminal path.

Jake Slater and I, along with some other members of the club, had started hanging out at an Asbury Park club called the Alamo, where a new blues-rock vocalist and guitarist from Wilmington, Delaware, was playing—George Thorogood.

Located in a converted two-story residence, the Alamo was about a quarter mile from the city’s oceanfront boardwalk. Two bouncers flanked the front door, and a long bar ran down the right-hand side of the first floor.

There was a stage at the far end of the bar for live acts, and a TV over the counter that was used for showing old boxing films. We tried to keep a somewhat low-key presence there, so we seldom wore our Pagan colors when the Alamo was our destination. But, colors or no colors, Jake drew attention wherever he went.

One night, we got word that another outlaw motorcycle gang was going to the same club incognito. Hells Angels, Outlaws, Bandidos and other outlaw biker gangs were not welcome in any of Asbury Park’s clubs.

Asbury Park was Pagan territory, and it was rare for another club to challenge us. When another gang came into Pagan territory, it was up to the local club’s members to take care of business. It was a simple, and oftentimes brutal, gang rule that left some bikers with permanent scars, or worse.

Three of us—Jake, another biker I knew only as Vinnie and I—decided to go to the Alamo to see if the rumor about outsiders coming into town was true. Short in stature, Vinnie didn’t look particularly threatening.

But the well-used buck knife that hung from his thick leather belt told another story of frequent combat with other men; Vinnie was a skillful knife fighter. His arms were covered with spiderweb tattoos, and his bug eyes gave him a rather odd appearance, like that of a malevolent lemur. Oddly, Vinnie was also known for always showing up on time; he kept his watch 10 minutes ahead of the actual time.

Soon after we walked through the door to the Alamo, we noticed five legit-looking bikers giving us the once-over. I couldn’t tell if they were Hells Angels, Warlocks or Breed. But they weren’t weekend warriors; they were real. Both sides kept it peaceful inside the club. Since things were quiet, at least for the moment, I began chatting up a blonde at the bar. Shortly before closing time, the five mystery bikers quietly walked out. Jake and Vinnie followed them. I walked out a few seconds later, after saying goodnight to the woman.

By the time I cleared the door, a full-scale street brawl was already underway as Vinnie and Jake fought with the gang of five. There was diagonal parking out in front of the Alamo that was normally packed with cars and people. But at this late hour, the parking spots and tree-lined street were empty—and that’s where the fight was happening.

Vinnie pulled his buck knife from its sheath and slashed one of the mystery bikers across the face. Jake grabbed a piece of a wooden barricade—the kind used by police for crowd control—and fiercely swung it at two of the others, taking them both down.

Though unarmed, I ran into the fight, intent on taking out one of the two bikers still standing. Dressed in a black T-shirt and jeans, this dude wasn’t particularly big. But he looked like a tough guy, a thug, and I got the sense that he knew how to use the long buck knife in his right hand. Calm and focused, he stood staring at me.

As soon as I came within striking distance, he lunged at me with the knife, aiming for my face. I jerked my body back to avoid the thrust, just as one of the other bikers careened into my shoulder and fell to the side. I threw an adrenaline-laced overhand right that caught my attacker on the bridge of his nose. The impact caused his nose to virtually explode, shattering the soft cartilage and sending blood everywhere.

My attacker lunged at me again, but his move was slow and off–balance—he was disoriented and in pain after my blow to his nose. I grabbed his right wrist and yanked the knife away from him as he wobbled on unsteady legs.

Shifting my grip on the knife handle, I slashed backward across his upper chest and to my left. The biker was now bleeding profusely from both his nose and his chest. He lifted his arm to wipe at the blood dripping from his chin before dropping into a crouch. Suddenly, he got knocked into me as Jake and another bloodied combatant continued fighting nearby.

The stunned biker and I grappled, tripped and fell to the street. He landed on top of me, and I could feel the warm blood from his nose running onto my face and chest. I frantically bucked and pushed him off me. The man had no fight left at this point, and he collapsed onto his side.

He tried to get up but fell. Slowly, he staggered to his feet, still bleeding profusely from his nose and torso, and backed away from me. His fight was over. I glanced over at Vinnie and saw that his opponent was lying on the street and also bleeding heavily.

Jake, Vinnie and I scanned the scene and shared quick looks at each other. The fight was over. The five mystery bikers were either lying in the street or quietly skulking away from the scene. We knew it was time to leave before the boys in blue arrived and started asking questions.

The three of us hopped into a car Jake had “borrowed” from one of his customers; we knew it would need some serious cleaning to get all the blood out. From what I’d been told, Jake never got complaints from clients about blood stained-interiors or other issues.

There was no joyous celebration of our decisive victory. We were spent and coming down from a high that only people in certain lifestyles and occupations experience. This was grim stuff, and any loud bravado about it would have been unwise.

We drove north along the Jersey Shore, passing through Long Branch and Monmouth Beach before finally arriving back at our club’s headquarters in Atlantic Highlands about 45 minutes later. Only the three of us were there that night. I grabbed a hose and used it to get all the blood and bodily fluids off my face, arms and clothes. When I finally went to sleep that night, it was as if I had slipped into a coma.

At one time, I had found that sort of street fight truly exhilarating. Now it left me feeling cold and empty. There could be no real reason for this shit. I knew that the hard-core older members of the club still thrived on fighting. But I felt like my fighting days were done. It didn’t feel like another night on the other side of life. It felt like muerte, death.