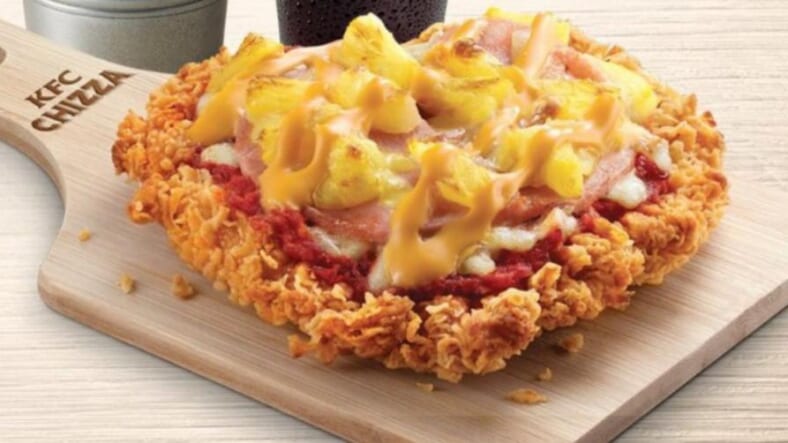 Another day, another fast-food fried chicken mash-up that you never knew you needed.

Following in the same greasy footsteps of their infamous Double Down sandwich, KFC is back in the unholy hybrid game with the “Chizza.”

It’s pretty much exactly what you would expect, given the name: a pizza with a crust made out of goddamn fried chicken and topped with mozzarella cheese sauce, pineapple, ham and, yes, even more chicken.

It may sound strikingly similar in concept to Taco Bell’s recently released Naked Chicken Chalupa, but it’s been moving through the franchise’s Asian locations since 2015, most recently debuting in Singapore on Tuesday.

They haven’t announced when or if the Chizza will haunt our dreams in the States, but as Mashable notes, people’s actual experiences with this mutant comfort food concotion overseas might warrant a hard pass from the American market.

Granted, most of the media handouts released by fast food chains look way better than the actual product, but some photos of the real-life Chizza look really fucking gross.

Sure it may look kinda nasty, but can you really judge a Chizza by its cover? In this case… yeah, you probably can.