The Dept. of Defense Is Serious About Killer Robots

Deadly battlefield bots that think for themselves are the future. 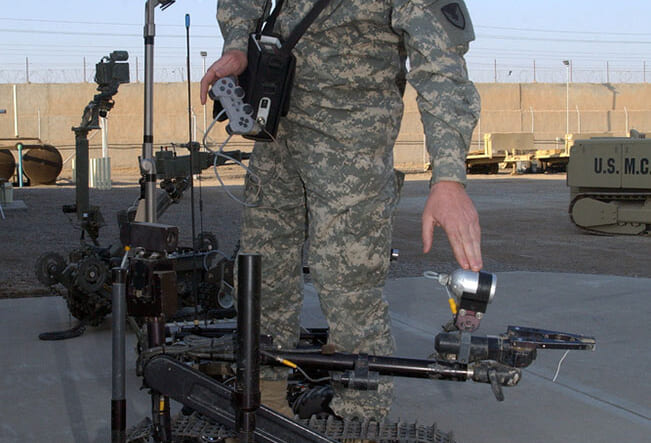 If there are robots of any kind in military use today, they’re under human control. And according to a report in National Defense Magazine, that’s as it should be—soldierly control of battlefield robots is Defense Department policy. In the near future, however, that could change:

The Pentagon is working on the so-called third offset strategy, in which it envisions virtually every part of the armed forces working with a variety of automated systems and robots on battlefields to give warfighters a technological edge. Melissa L. Flagg, deputy assistant secretary of defense at the office of the undersecretary of defense for acquisition, technology and logistics’ research directorate, said there is no “book” being written on the offset strategy, and there are many still unanswered questions on how humans will work together with machines.One of those questions centers around robotic systems and whether they can deploy weapons without a human in the decision loop, she said at the National Defense Industrial Association’s Ground Robotics Capabilities conference in Springfield, Virginia.

Simply put, the military is taking the concept of putting automated mobile weapons with the ability to make their own decisions and act accordingly pretty seriously. National Defense Mag quoted Flagg as saying the military really has “to think what autonomous kinetic options really look like” with an eye toward these robot soldiers handling the “highly competitive, highly contested” situation of working inside enemy lines.

Col. Henry Lutz is the Marine in charge of the office developing the DoD’s approach to robots handling their own business on the battlefield. In a report National Defense stated is due in May, 2016, Col. Lutz’s team studying autonomous systems will discuss independent as well as “semi-autonomous” robots hitting the battlefield as a serious option by 2035.

While Col. Lutz sounded a cautionary note when he told the magazine that the capability of letting robot warriors loose is not something the military should do just because they can, this possibility is already giving scientific thinkers real fits. As one computer scientist said at the Davos World Economic Forum in January, 2016, “I am against robots for ethical reasons.” However, he also knew that his reasons might not sway those angling for this route to a supposedly less bloody field of war for the side with the machines, concluding, “strategic arguments” agains autonomous robot soldiers “will win the day.”

We hope the smartest solution wins the day. For the pro-robot side, we’re pretty sure Google-owned Boston Dynamics is already working on exactly the sort of super electronic soldier the future might fear.

We don’t recommend watching any Terminator films after reading about these things.