There truly is something for everyone. 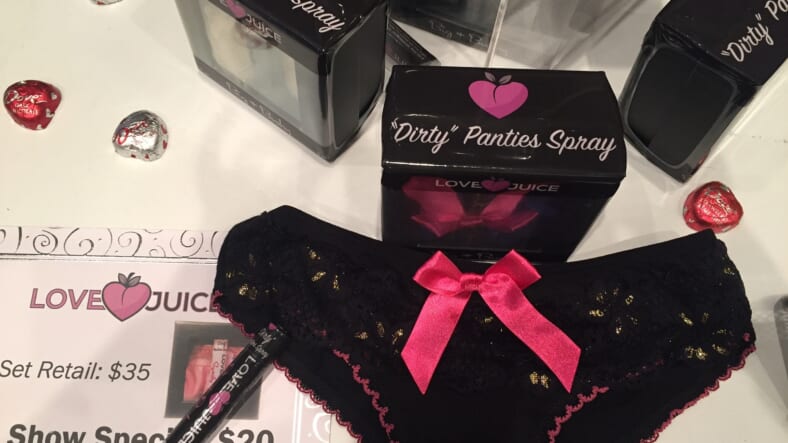 The consensus among most men is that “vagina” may not be their favorite scent, but if it’s close enough to their face in the first place, they’re definitely not complaining. But some people enjoy a “natural odor” more than others. If you’re one of those people, I’d suggest scrambling to your computer to invest in some Love Juice.

Granted when I hear the phrase “love juice” I’m probably thinking about the fluids associated with a man rather than a woman, but in this instance, we’re referring to a perfume designed to smell just like a woman’s vagina. On display at this year’s AVN Adult Novelty Expo, the startup began with the founder’s love of sniffing underwear.

Okay, sure. But do they hold up? We sniffed a pair and have to report they’re much sweeter smelling than any average woman we’ve ever known. But that’s the point. “We wanted to make them pleasant smelling, but as realistic as possible. It’s more reminiscent of a vagina than anything else,” Scott continues.

And if this is sounding like a plot line straight from Orange Is the New Black, you’d be right. Scott says she gets the comparisons all the time: “We actually developed this before that came out, and when I saw that episode it actually spurred me on even harder. I pushed really hard to find a fragrencer and a chemist,” she says.

The spray is made from essential oils that are safe on the body, but they note you probably shouldn’t get the stuff inside you if you can avoid it.

Olfactory-inclined users have the choice of Squeaky Clean (“just out of the shower”), Eau So Natural (“a yoga instructor doing a couple hours of a workout”), and Big and Bushy (“funky, been wearing them for three days and not showering”).