But it comes at a price. 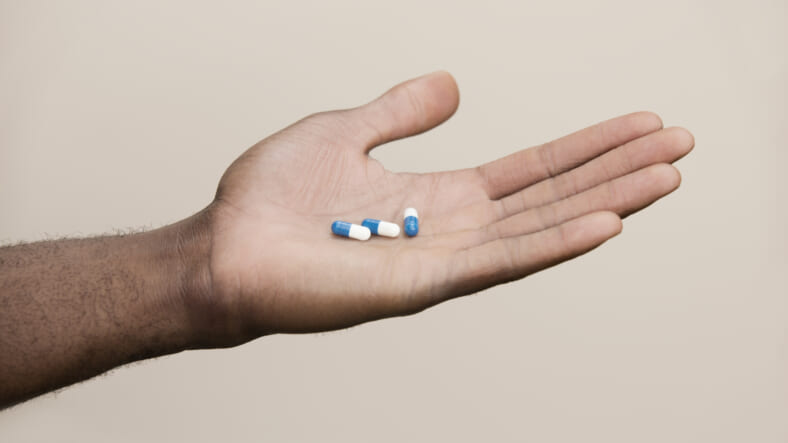 We’ve seen some stellar ideas for male contraception in the recent past, ranging from the dick-switch to spray-on condoms, though none of them seemed to make it very far yet. But good news, gentlemen! According to the NY Daily News, The male birth control pill you’ve been waiting for is actually in the works.

This past weekend at the 251st National Meeting & Exposition of the American Chemical Society (ACS), scientists from the College of Pharmacy at the University of Minnesota claimed that they are close to finally making the male birth control pill a reality. Their ingenious idea? Pumping men full of extra testosterone in order to decrease sperm count. While yes, that might be a little dangerous health-wise, it’s a scientific breakthrough, nonetheless.

“At certain doses it causes infertility,” researcher Jillian Kyzer said at the ACS. “But at those doses, it doesn’t work for up to 20% of men, and it can cause side effects, including weight gain and a decrease in ‘good’ cholesterol,” which all sound like bad side effects you probably don’t want.

Aside from the obvious health risks and side effects associated with having tons of artificial testosterone running through your veins, too much extra macho-man-hormone could turn you into an aggressive, rampant sex freak, and seeing this obvious problem, neither Kyzer nor Georg commented on this potential side effect.

According to Gunda Georg, one of the lead researchers, the ultimate goal of the oral male contraceptive pill is for it to be safe, reversible, and not decrease libido, because abstinence kind of defeats the purpose of the pill, and too much testosterone is, as we pointed out, very bad.

Before their testosterone idea, the scientists studied two fertility targeting compounds developed by biopharmaceutical company Bristol-Myers Squibb, which they found to have even more unsavory side effects, making the testosterone idea a safer option.

However good the male birth control pill may be for protecting you against babies, it won’t do squat against STDs, which will likely be a problem, considering condom use could drop.

Whether the pill will be available soon or not, rest assured that the evolving future of birth control is looking pretty bright.