Be prepared to take some spills. 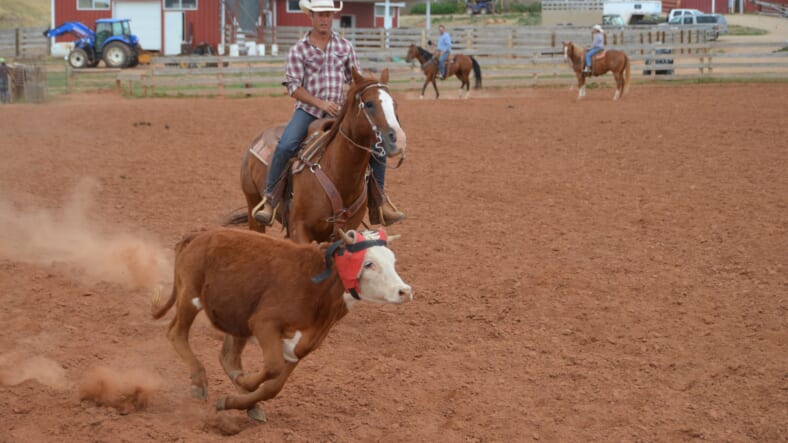 “You should put some turpentine on your boots,” laughs former pro rodeo rider Clay Tollinger.

“Why,” I ask, concerned I didn’t pack any in my suitcase.

“So the ants can’t crawl up your legs and eat your candy ass!”

It’s just after sunrise on a late summer morning and I’m sitting alongside Tollinger in the tack room of the Red Reflet Ranch, a dude ranch in Ten Sleep, Wyoming. Tucked into the base of the Big Horn Mountains, Red Reflet is straight out of a Cormac McCarthy novel. There are Chugwater sandstone cliffs, limestone canyons, aspen forests, and trout-filled streams. Elk, deer and antelope roam the ranch’s 27,000 acres. But I haven’t come here for the nature or wildlife. I’m here for the horses. Under the guidance of Tollinger, the ranch’s horse manager, I’ve arrived from the Big Apple to learn how to rope and ride.

Why would I want to spend my time off getting up at the crack of dawn and laboring in the blazing sun and dust? Man skills. Back when I was younger, vacation was all about boozing, beaches and women. Getting in at 6 a.m. instead of getting up at 6 am.. But these days, I want to come back from vacation having learned something. I’m not talking about mastering Downward-Facing Dog, either. I want skills. Something to test myself. Something a bit dangerous. A vacation that requires health insurance information.

Red Reflet was perfect because it scared the hell out of me. I’ve ridden motorcycles across Death Valley and on the Indianapolis Motor Speedway at 140 mph. I’ve raced in the Baja 1000. Hell, I’ve even been to bullfighting school in Mexico. Horses, however, have always freaked me out. Last time I rode one (as an adult) was a 20-minute polo lesson in the Dominican Republic where I kept whacking the poor old steed in the head with the polo mallet. Yet Hollinger, in Wrangler jeans, a white cowboy hat and an omelet-sized belt buckle that reads “Champion Team Roper Fiddleback WY 2002” assures me I’ll be fine. “Only 30% people who come to the ranch know how to ride,” he says. “Just relax and enjoy yourself. And don’t expect too much.” Like he has to tell me that.

Tollinger gives me some rules as he helps me onto Dollar, one of Red Reflet’s 50 horses. Always mount a horse from the left side, make sure your feet in the stirrups (though not too far in) and never, ever—while on a ranch—wear a baseball cap backwards or a plaid shirt with fringe. We enter the 300 x 150 foot riding pen and walk. With only three days here at Red Reflet, I know I’m not going to leave an expert. But I don’t want to just be some city slicker. I want at least a kernel of real experience and some wisdom to take back with me. For the next two hours, Dollar strolls slower than my grandmother. I don’t, however, fall off. There’s hope for me.

Day two arrives and I’m so sore I can barely climb out of bed. Yet I hobble down to the barn. Although Dollar stands at the ready, I’m not given a bridal but a nylon, poly blend rope. It’s far stiffer than any rope I’ve handled in the past but, as Mason Tollinger—Clay’s 12 year-old son—explains, it’s “what we ropers use.” Mason, aspiring to follow in his daddy’s roping footsteps, shows me the basics. Make a wide loop. Arm out. Counter-clockwise spinning the wrist. Mason easily tosses the loop over a bucket on the barn floor. I’m sure he could do it with his eyes closed. I can’t. Far harder than it looks, I don’t get close. Yet after an hour, I finally land one. Then another and another. It’s all technique and release point, sort of like throwing a nice spiraled football. That afternoon, I’m back in the pen. Trotting. A little loping. Finding a rhythm. Clay brings one of the farm’s several dozen Corriente cows (used for roping) into the pen.

“I want you to move him around,” says Clay.

“Move him where?” I ask, sensing this might be a bit advanced.

“Wherever he don’t want to go.”

The black and white cow, a few hundreds pounds of disagreement, doesn’t want to be moved around. He wants to be back with his Corriente cow friends. But I do as instructed and ride behind the cow moving him forward. I come alongside him forcing him left and right. Atop Dollar I’m changing speeds like on motorcycle and every minute I’m more and more comfortable. By the end of our lesson I’ve forgotten I live in a city of seven million. Back at the barn I meet Colter Wise, a part time employee and one of Wyoming’s top high school rodeo stars.

“How long you been riding?” asks Colter.

“Really?” Colter ponders this. “Well I don’t think I’ve ever seen anyone learn so fast.”

The following morning—my last day—I prepare for my de facto final exam. I gallop in the pen. I study Clay and Mason team roping; when the Corriente bolts out of the cattle chute, father and son pursue it on either side, one roping the front legs, the other roping the rear. I have tempered expectations; only hoping to land my rope over the cow’s head. But I have creeping doubts. Out of the chute the cows run really fast and to ride up close, swing the long rope, aim, and land my throw looks impossible. I’d also like to avoid killing myself, Dollar, or the cow in the process.

“C’mon Tim,” says Clay in a comforting tone. “Slide on up beside that chute.”

I do as I’m instructed. My heart races. Palms sweat. I’m not sure I’m ready for ‘go time’ but there’s no turning back now. I give the ‘thumbs up’ and Mason opens the gate. The cow fires out and I nearly fall off as Dollar takes off after it. We go zero to full speed in two seconds and suddenly we’re closing in on the cow’s left side. Exhilaration replaces fear. I imagine it’s not unlike the rush of a drag racer or fighter pilot. Bolting along the side of the pen, I get so close to the cow I can almost touch it.

But as we get to the end of the pen, I don’t test out my rope. It would have been too much, too soon. I figure it’s better to be safe and rope another day. Dollar and I, both a little disappointed, trot back to Clay.

“But I didn’t rope anything,” I reply.

“Well you can’t measure it like that. You learned how to ride. You didn’t get your shirt dirty. I’d say that’s a success.”

I nod. He’s right. I had a new man skill to take home to New York City with me.

“Well I only got one more question,” he says. “You ready to get back out there?”

“You bet your candy ass I am.”