Weed Might Be Exactly What Your Sex Life Needs

A new study proves what we’ve known all along. 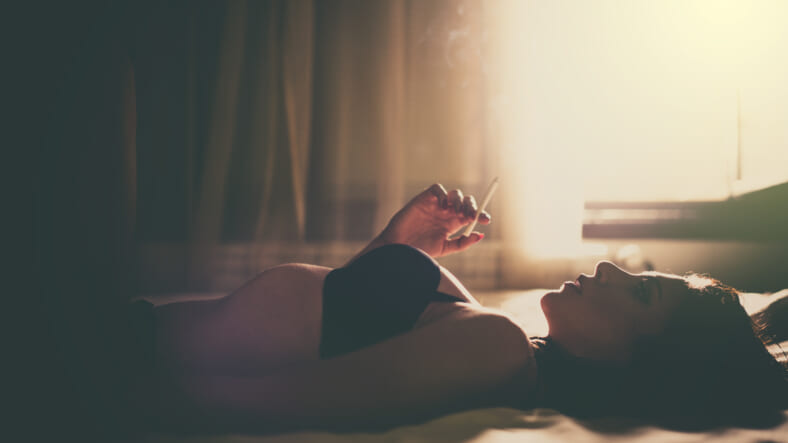 Marijuana is the wonder drug that somehow has a bad reputation. We actually owe a lot to the wonders of pot – it fights cancer, relieves menstrual cramps, completes Rihanna’s life – there’s little it can’t do. But here’s a secret: weed is a powerful aphrodisiac, too.

But this is actually no secret, because people have been smoking pot to get in the mood for centuries. According to an article published in the Journal of Psychoactive Drugs, sacred texts revealed that ancient Indians used cannabis for sensual tantric sex, which apparently lasted 7 to 8 hours, resulting in full-body orgasms, leading to Nirvana. If that doesn’t sound like good sex, I don’t know what does.

According to a new survey of 1,400 legal marijuana users from HelloMD, a healthcare platform dedicated to marijuana, 14% of respondents reported using weed to significantly boost their sex drive, which means those people have caught on to the weed-aphrodisiac-trend.

The survey also revealed that anxiety was the most common condition marijuana was used to treat, with 76% of users using cannabis for relaxation, and 47% using it for mood elevation. When you think about it, being relaxed and in a good mood makes for great sex, so it’s a win-win situation.

In addition to treating their primary condition, 85% of users said they “feel that cannabis use enhances their creativity,” which is a welcome side effect, as it could lead to hot new sex positions, depending on how you utilize your new found imagination.

In an essay, the late prolific scientist Carl Sagan wrote that weed “enhances the enjoyment of sex. On the one hand it gives an exquisite sensitivity, but on the other hand it postpones orgasm: in part by distracting me with the profusion of images passing before my eyes.” In other words, stoned sex is incredible.

Validating Sagan’s truthful words are multiple studies on the effects of marijuana on sexual performance, because aside from the psychological effects pot has on your sex drive, there are physiological effects as well, like increased heart rate, increased blood flow to certain areas *wink wink* and changes in respiration, that all mimic sexual arousal. The THC in weed also triggers the release of dopamine in the brain and duplicates the neurochemical anandamide, giving you the feeling of being high and aroused at the same time.

Keep in mind that getting too high to function won’t make you sexually aroused, so like all things, moderation is key, and if you live in a state where pot is legal, please enjoy the amazing sex.