Get your pen and paper ready! 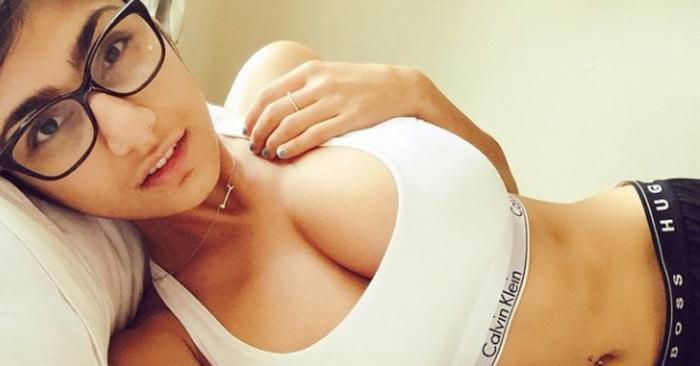 Maxim’s own resident sexpert has already researched and provided answers to the 10 most Googled sex questions.

1. “Where is the G-spot?” Hopefully, you haven’t gone your entire life without finding this super-sensitive pleasure center, but Mia has you covered if that’s the case.

That said, G-spot stimulation isn’t necessarily imperative to getting your girl off.

“I reach orgasm externally, not too much from just intercourse,” she told MH. “So I prefer clitoral stimulation of G-spot stimulation. But every girl is different.

“It’s about a bunch of different factors, like kissing and taking your time and being tender, or being rough, depending on what the girl wants. There’s no required time to spend on foreplay — you just have to feel the vibe.”

Instead of awkwardly asking her if what you’re doing is working while she’s trying to focus, just stay in the moment and listen. Sex noises tell all.

“If she’s moaning, she’s enjoying it. If her body starts shaking, or if she looks like she’s having an exorcism performed on her, she’s getting close. That’s usually a good sign.”

3. “How to get a bigger penis manually” (Does size matter?)Obviously, Mia has been with some pretty sizable men. But don’t let your preconceptions get the best of you!

“I don’t think size matters at all,” she told MH. “The best sex I ever had was definitely not with the most well-endowed man I’ve ever been with. It’s really all about the way you treat a girl and the way she feels about you.”

Even if you’re significantly smaller than the average dude, a bit of confidence and experimenting with alternative positions can go a long way.

“If you’re small, you can put a pillow under the small of her back helps with angles. And if she goes down on you a lot, she’ll be able to deep-throat you easier and you’ll feel like a rock star.”

4. “How long does sex last?” (Or, how long should sex last?) You definitely don’t want to be a minute man, but banging for hours on end won’t make you a hero, either.

What did you expect from the DC sports girl? Moving on…

It’s not all pain and no pleasure. Just be sure to use a titty-ton of lube.

“I will say a lot of lube really helped, and it was enjoyable after the first two minutes, but even then, it was a different kind of enjoyable than I could ever describe.”

6. “How can I last longer in bed?”If a girl hopped off during sex and started going down on you, you wouldn’t be upset. So…

Take the same approach when you’re having sex with a girl. She’s not gonna get mad if you pull out and start going down on her. She won’t even know that you’re trying not to come. She’ll think that you’re doing it because it’s hot, and it’ll turn her on more.

7. “Why won’t my girlfriend have sex with me?”Sex is a physical and emotional act. And if there isn’t a physal issue, then it probably has to do with the latter.

Maybe you’re not listening enough to what she wants and you need to go slower, or be more gentle. Maybe the connection’s just not there. Do something romantic with just you two. You don’t have to whisk her off to Bora Bora — just do something small and intimate with the two of you, to reignite that flame.

If it’s still not happening, have a talk talk. Again, exercising patience and understanding is of utmost importance.

“Above all else, if you two aren’t having sex anymore, you need to talk about it, or else it’s just not going to change. But tread very lightly. If my significant other came up to me and said, ‘We never have sex,’ I know I would get defensive.”

Read all that Mia has to say over at Men’s Health.