The working man’s favorite reality star says what should be said. 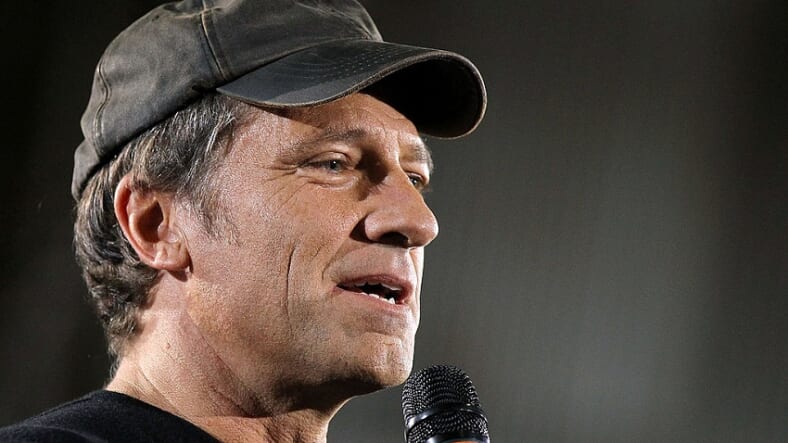 Former Dirty Jobs host Mike Rowe is a man who’s worn many hats. He’s been a reality TV star focused on the kind of unsung grunt work done by everyday folks, and an entertainer — hell, he even trained to sing opera at one point. In recent years he’s also developed a uniquely uplifting presence online with social media, and managed to carve a niche as a man who whatever his own views seems to garner equal amounts of respect from people on either end of the political spectrum.

A lot of that is due to the way Rowe expresses himself in situations that could, for another public personality, be awkward. Case in point: Rowe had in recent months exchanged messages with an ailing U.S. special forces soldier named Justin. The soldier has ALS, aka “Lou Gehrig’s Disease,” a deadly, debilitating disorder which leads to paralysis, then death.

Justin’s mother sent Rowe a letter of thanks for his kindness. The Roosevelts reports that the letter said Justin had just had “a horrible experience causing him great discomfort both physical and emotional.” Justin eventually got to his mail, his mother wrote, and read a message from the TV personality. “It brought tears to his eyes,” the soldier’s mother wrote, “just knowing you took the time out to acknowledge him.”

The letter went on to express the family’s “deepest gratitude” to Rowe.

In response Mike Rowe was a model of grace, civility, and respect for the young American hero:

I suspect words like “Merry” and “Happy” are difficult to hear at the moment, so I’ll forego the holiday greetings, and simply say “you’re welcome.”I was very sad to learn of your son’s illness, and deeply humbled that a man like Justin finds me “admirable.” Please assure him the feeling is mutual. The truth is, acknowledging Justin’s service is both an honor and a privilege. I know that my freedom and my liberty were bought and paid for by people like your son. I know his freedom is now being removed one day at a time. I know that his liberty is being slowly denied, by an enemy he cannot overcome.I would like you to know, that your note reminded me of just how tenuous it all is. Our freedom. Our liberty. Our health. It’s all so fragile. And so damn easy to take for granted.Sooner or later, our bodies will fail us. There are no exceptions. But what Justin did with his body while it was still in his control, has left me forever in his debt, and mindful of what matters most. Because ultimately, there is no greater threat to our freedom, than a lack of gratitude to those who provide it.Your note is a reminder that acknowledging soldiers like Justin, requires me to count my many blessings, and vow to be a better version of myself. Actually Diane, it’s more than a reminder – it’s a gift. A gift from you and your son.A gift for which we, the undersigned, are most grateful.Mike

We’re pretty sure Rowe knew he was speaking for many who might never have a chance to get in touch with Justin to express their own gratitude for his service and his sacrifice.

That’s how it’s done, and we’re glad that Mike Rowe found the words to do it for us.