Edward Byers, we salute you. 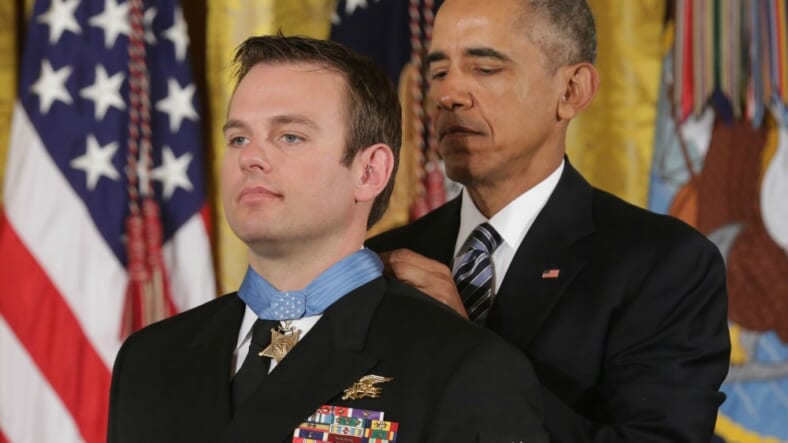 Edward Byers is officially an American hero.The Navy SEAL was awarded the Medal of Honor on Monday undertaking the daring rescue of an American civilian held hostage by terrorists in Afghanistan in December 2012, CNN reports.“Ed is defined by a deep sense of humility, he doesn’t seek the spotlight, in fact he shuns it,” said President Obama on Monday. “He’s the consummate quiet professional. Today’s ceremony is truly unique — a rare opportunity for the American people to get a glimpse of a special breed of warrior that so often serves in the shadows.”“Special breed of warrior” doesn’t even begin to describe the “superior gallantry, extraordinary heroism at grave personal risk” the Navy credits Byers with during the bloody rescue operation. Not only did the SEAL successfully execute his mission, but he did so in the most badass way possible: with “hand-to-hand combat” with multiple enemies. Just read the Navy’s official account of the December 2012 operation.Here’s some background on the mission:

Dr. Dilip Joseph is an American citizen, who was abducted with his driver and Afghan interpreter on 5 December 2012. Intelligence reports indicated that Dr. Joseph might be transported to another location as early as 9 December 2012. Dr. Joseph was being held in a small, single-room building.The target compound was located in a remote area beside a mountain in the Qarghah’i District of Laghman Province, Afghanistan. Chief Byers was part of the rescue team that planned to make entry into the room of guards where the hostage was believed to be located. Success of the rescue operation relied upon surprise, speed, and aggressive action. Trading personal security for speed of action was inherent to the success of this rescue mission. Each assaulter in the rescue force volunteered for this operation with full appreciation for the risks they were to undertake.With the approval of the Commander of all International Security Assistance Forces in Afghanistan, the rescue force launched from its forward operating base. The infiltration was an exhaustive patrol across unimproved trails and mountainous terrain. After nearly four hours of patrolling, the rescue force was positioned to make its assault on the target compound.

Here’s where things get out of control (emphasis ours):

As the patrol closed to within 25 meters of the target building, a guard became aware of the rescue force. The forward-most assaulter shot at the guard and ran towards the door to make entry as the guard disappeared inside. Chief Byers was the second assaulter in a sprint towards the door. Six layers of blankets securely fastened to the ceiling and walls served as the Afghan door. While Chief Byers tried to rip down the blankets, the first assaulter pushed his way through the doorway and was immediately shot by enemy AK-47 fire. Chief Byers, fully aware of the hostile threat inside the room, boldly entered and immediately engaged a guard pointing an AK-47 towards him. As he was engaging that guard, another adult male darted towards the corner of the room. Chief Byers could not distinguish if the person may have been the hostage scrambling away or a guard attempting to arm himself with an AK-47 that lay in the corner. Chief Byers tackled the unknown male and seized control of him. While in hand-to-hand combat, Chief Byers maintained control of the unknown male with one hand, while adjusting the focus of his night vision goggles (NVGs) with his other. Once his NVGs were focused, he recognized that the male was not the hostage and engaged the struggling armed guard.

Byers was fighting a terrorist and adjusting his goggles at the same time in the middle of firefight. Are you shitting me? And it gets better:

By now other team members had entered the room and were calling to Dr. Joseph to identify himself. Chief Byers heard an unknown voice speak English from his right side. He immediately leaped across the room and selflessly flung his body on top of the American hostage, shielding him from the continued rounds being fired across the room. Almost simultaneously, Chief Byers identified an additional enemy fighter directly behind Dr. Joseph. While covering the hostage with his body, Chief Byers was able to pin the enemy combatant to the wall with his hand around the enemy’s throat. Unable to fire any effective rounds into the enemy, Chief Byers was able to restrain the combatant enough to enable his teammate to fire precision shots, eliminating the final threat within the room.

We salute you, Edward Byers. You’re the hero America deserves.