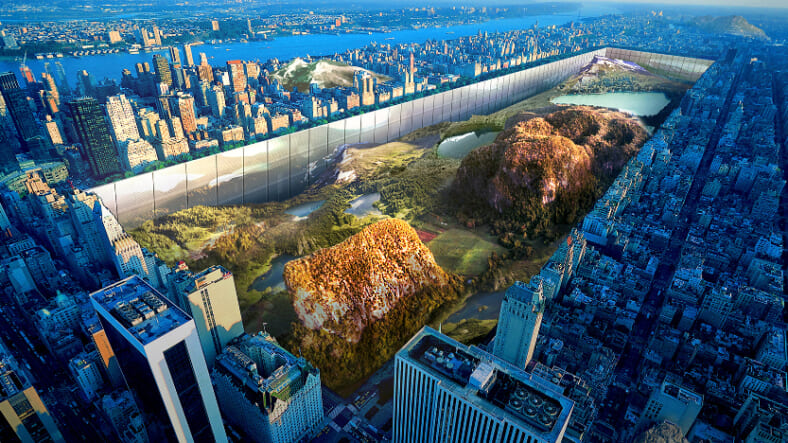 Of the nearly 500 projects received in eVolo’s 2016 Skyscraper Competition, the overall winner this year wasn’t the tallest, but definitely the most spacious. Dubbed “New York Horizon,” the concept radically reimagines the space in and around Central Park, by constructing a 1,000-foot tall, 100-foot deep surrounding glass wall that’d create 80 times more housing than could fit in the Empire State Building.But it’s not just a novel way to approach mass housing while working within the physical constraints of New York City’s finite footprint. A big part of the plan would be to remove Central Park’s upper soil, revealing the inherent bedrock—why it was built around back in the mid 19th century.

In this scenic mid-city view, we see big red rocks, serene lakes and majestic mountains. Although it might not look exactly like this when first dug up, a few landscapers set loose could probably work wonders. In the meantime, those (with a view) within the perimeter would be treated to amazing scenery on the coated glass walls of the superstructure.If we could be so bold, a nice addition to the design would further envision the facade to be covered by miles of continuous giant OLED displays. (Whatever the highest resolution possible is at the time of construction would have to do.) By definition, the current mayor would be granted to remotely controlling the content on the screens.