I Went to a Bachelorette Party at a Nudist Sex Resort, and It Was The Wildest Vacation Ever

Welcome to one of the raunchiest party spots on the planet. 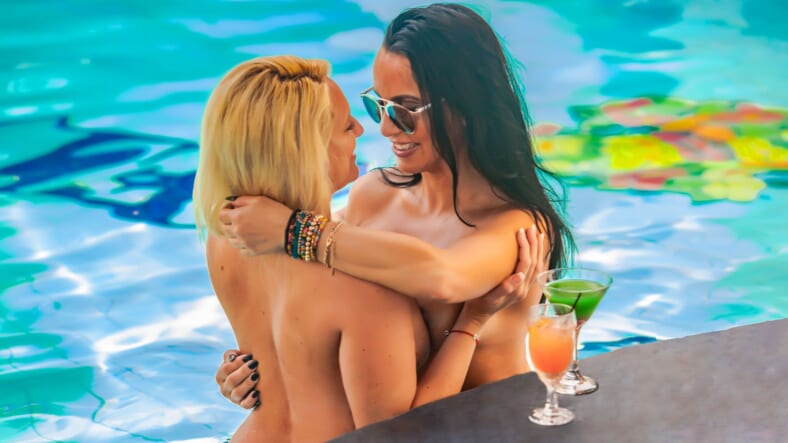 As far as I know, 95 percent of women genuinely enjoy bachelorette parties and think they’re super fun. Unfortunately, I am in the tiny 5 percent who find them idiotic and completely unnecessary, which is why I straight up rolled my eyes to China and back when I received an invitation to my friend’s bachelorette party.

However, when she casually mentioned that she was hosting her party over two days at a legendary clothing-optional sex resort in Jamaica, I realized her party wasn’t going to be the typical tacky exodus-from-singledom celebration where an army of shitfaced girls parade around in dollar store sashes, eat penis-shaped snacks, and get lap dances from male strippers.

Instead, this was going to be a rager at Hedonism II, which is apparently one of the most famous clothing-optional resorts in the world. All-inclusive fun in the Jamaican sun, with all the booze and jerk chicken you could ever hope for? And it’s totally acceptable — nay, encouraged — to be ass naked? Eh, why not. I’d go.

When I first arrived and was being led to my room by a grumpy bellhop who decided he wasn’t going to talk to me, I took a good look around and couldn’t tell if I was at a resort in the Caribbean… or the Poconos in the 1970s. It just had this very specific dystopic vintage vibe you’d find in the (former) “Honeymoon Capital of the World,” and considering this was a swingers resort built in 1976, it only made sense.

That said, opening the door to my room, I was almost expecting to find a round bed cheesily decorated with rose petals, a heart-shaped hot tub, and every surface to be wallpapered in mirrors. But no.

Instead, I stepped into a budget motel room and was immediately slapped with the overwhelming scent of industrial strength disinfectant. Holy fucking shit, the disinfectant. It almost made me wonder what the hell happened in there. Almost. I actually didn’t want to know.

I only had a few minutes to freshen up and head to dinner, so I went to wash my hands, but found that my sink was completely clogged and showed no signs of draining in the near future. So, I MacGyver-ed the situation and stuck my hands in the shower, which had three water temperatures: Ice-cold, too hot, and Satan’s butthole.

Apparently some of the rooms are renovated, but sadly, I wasn’t lucky enough to be put in one of those.

When my freshly-showered hands and I got to the dining room, I immediately spotted my squad — Cortney (the bride), Sydney, Jessica, Ava, and Joy — partly because they were the only table comprised of only women, and also because they were all wearing bridal veils. That shit is impossible to miss.

After dinner, we went off in search of more alcohol and some raunchy weirdness, and guess what? We found both of those real fast.

As we were walking through the courtyard towards a bar where there was live music, we were bombarded with congratulatory cheers from random couples, but I was lagging a couple steps behind the group because I was posting on Instagram (basic, I know). Seeing my distance between my group as a golden opportunity, an eastern European-looking couple approached me, grinning ear to ear.

“Who is getting married?” the husband asked jubilantly in a very thick Russian accent. “Are you bride?” He playfully jabbed a tubby finger at my chest. The wife was making some intense eye contact with me and giggling.

“No, I’m not getting married. We’re just here for my friend’s bachelorette party.”

“Oi! Beautiful girls, all of you. Verrrry pretttty.” he said slowly, taking a step closer. A few suggestive comments later, I immediately knew where the conversation was headed, and it was escalating at warp speed. Oh, God. I could see the horniness in their eyes. He leaned in, his voice dropped an octave, and he softly asked me in his Russian accent: ‘Do you want sex with my wife?’ I watch.”

Well, shit. Was he serious? Yeah. He was dead serious. They were both staring at me. I stared back, unsure of what to say. I really wanted to laugh, but that would’ve been super rude, so after literally no less than five full seconds of really uncomfortable eye contact, I kindly declined their generous offer, and power-walked to the bar to find my friends and drown myself in hard liquor to forget everything that just happened in the past few minutes.

Fast forward to 2 a.m., and I’d had an ungodly amount of champagne, danced on top of a piano, and a man had politely requested to “caress” my “round and supple butt” with his toes. A tempting offer, but I declined and went to bed.

In the afternoon, we took our bridal party to a secluded part of the beach, and a random Jamaican man walked up to us. “Hail up, gals. How are you today?” He had a huge backpack, so I already knew who he was and why he was talking to us. He was a drug dealer.

“I got weed. I got brownies.” He pulled a big box of pot out of his backpack and stuck it in Joy’s face for her to smell, and continued the trunk show with his next items: “I got Viagra. Valium. Percocet.” He took out a box of Percs and shook it at us. “Cocaine. Ecstasy. Mangos.” He pulled out an actual bag of mangos and held it up high.

A drug and mango dealer. Amazing! I was so delighted that a drug dealer was also dealing tropical fruits, so I bought three. “I’ll take those mangos,” I told him, digging through my bag for some cash.

“Thank you, my dear.” He handed me my mangos. “I’ll give you a free line of cocaine, too.”

I wasn’t really interested in his “Buy 3 mangos, get a free line of coke” promotion so I kindly declined, but two of the girls wanted to buy some party favors (come on, they were on vacation), but didn’t have enough cash to pay for everything, so they gave him what money they had, took the goods with a swift handshake, and asked him to come back in half an hour so they could go to the ATM.

“Bless up,” he said with a quick bow, and went on his merry way.

Now, I know what you’re thinking — no, they didn’t scam him out of the rest of his money. A quick trip to the ATM, and they were back on the beach, waiting for our new friend. However, the time came, but he didn’t. Another half hour passed, and he still didn’t show. Wondering if he sold us oregano which was why he wasn’t coming back for his money, Sydney sparked up, and it was definitely not oregano.

And I guess that non-oregano was some gooood shit, because in a few minutes, Ava was topless, Sydney was completely naked, and the rest of the squad had peaced out to lose themselves in some jerk chicken. I stuck with the nudies on the beach and shimmied out of my bikini and blessed Negril with a view of the goods.

You know, as weird as it initially felt to get naked on a beach, the whole nudist thing starts to feel incredibly natural after a few minutes. It was super liberating, and the warm tropical breeze felt absolutely delectable. 10/10, would recommend. I totally get why people are into this lifestyle.

However, just when I thought nothing could shit all over my internal serenity of being naked, relaxed, and deliciously day-drunk in a tropical paradise, out of the corner of my eye I caught a glimpse of one of the guests doing some sort of jerking motion.

I honestly didn’t want to know what the hell he was doing because ignorance is bliss, but Sydney noticed him too, because she tapped my arm and whispered: “That guy is jerking off, and he’s straight up staring at us.”

Now I had to look at him. I turned and we made eye contact, and you know how most people quickly look away when you catch them staring at you? Not this dude. He literally did not care that I caught him rubbing one out to us, and he just kept going at it. He had absolutely no fucks to give. Zero.

I took this as a sign from the universe that I should probably go get ready for dinner, so I grabbed my stuff and headed back to my room, but as I was crossing the beach, I saw a group of policemen walking along the water, so I asked one of the staff members why they were there. He told me locals always walk along the beach and sell drugs to hotel guests, so the police occasionally stroll through to catch the dealers.

After dinner, I went to the bar for another drink, and an old-ish couple — probably in their mid-60s — eagerly approached me and enthusiastically introduced themselves as “organic farmers” from Colorado.

Before I had a chance to process this man’s arm on my waist and the bizarre sentences that just came out of his mouth, his wife grabbed my cheeks and gave me a wet kiss on the corner of my mouth, and wrapped me and her husband in a group hug. Before I could say a single word, he quickly added: “After we fool around with my wife, I’ll arrange for another man for some guy-on-girl-on-guy action! What do you say?”

“Why don’t I let you guys know how I feel after a couple drinks? I’ll find you later if I’m feeling up for it,” I told them, trying my best to let them down easy.

“GREAT!! Here’s our business card, call or text whenever you’re ready!” the wife squealed, scribbling their room number on the card. “In fact, just come to our room at any time. Even if it’s 4 in the morning, we’ll be ready for you,” the husband added, closing in on me. “At. Any. Time.”

Later on, I found two of my friends in the disco chatting up the cute bartender, and asked them where everyone else was.

“We lost Joy after the fifth shot of tequila, Ava was dancing up on some old man on the beach, and last I saw, Sydney was blowing a Polish guy who doesn’t speak English in the pool.”

Gross. Sounds like a typical bachelorette party. But way sloppier.

And with that said, I was ready to end my evening, and as I rounded the corner to my room, I had one last sex surprise waiting for me: My neighbors were having super loud sex with all the lights on and the door wide open.

A weird noise escaped my throat when I saw their sweaty, elderly naked bodies slapping together. “I’m so sorry!” I instinctively yelled and looked away. My eyes were seared like steaks. I did not need to see that, nor did I want to, but clearly they wanted me to see that.

“You’re…welcome to…join us,” my neighbor breathily called out between thrusts as I fumbled to find my room key to get away from this unholy sex show.

“NO no oh my God I’m so sorry,” I whimpered, finally finding my key, jamming it in the door, and escaping to the chaste safety of my room, thereby concluding this trashy sex-and-booze-fueled Bachelorette party adventure.

Obviously, the folks who choose to vacation at Hedonism know exactly what they’re in for: A sleazy swingers resort where anything goes. While that’s not something most people would ever find endearing, others clearly love it.