This compact cabin is built to withstand the most extreme conditions known to man. 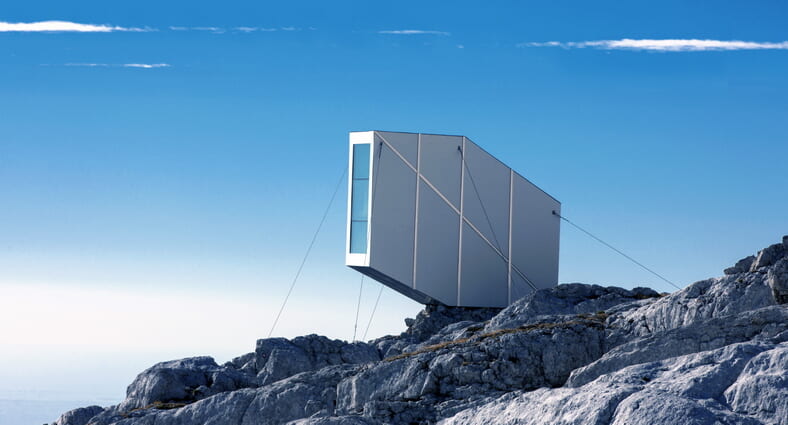 When most of us hear “winter retreat,” we picture either a cozy après-ski lodge or (just the opposite) a tropical sandy beach to escape the season’s chill. The Alpine Winter Cabin on Kanin Mountain in Slovenia is neither of those.It’s a three-level, 100-square foot shelter that was gingerly placed atop its rocky perch by a persistent Slovene Armed Forces helicopter crew. The cabin was designed both to exert the smallest possible footprint on the rugged natural terrain and afford the most spectacular 360-degree panoramic views of the area.

The cabin’s designers, OFIS Architects, believe it will become “a destination for hikers, climbers, cavers, mountaineers, nature lovers and romantics.” (It’s built to accommodate nine mountaineers and provide shelter from extreme weather conditions of wind, snow and landslides.) But it’s tricky to tell how romantic its inhabitants will feel after enduring the exhausting journey just to get there.

Other than offering an amazing place to contemplate the majesty of nature in a philosophical sense, it’s meant to be a weather station, where they can study the local environment’s harsh winds, rains, snows, landslides and occasional earthquakes. (Sounds like quite the relaxing retreat!)

But at the end of the day—weather permitting—it does look like one of the coolest places on earth to chill at. We just hope it comes standard with high-speed Wi-Fi. You know, just in case we want a change of pace from all the various caves, abysses, crevasses and staring out for miles like the king of the world.