This Luxury Airplane Seat Is the Flying Executive Suite You Deserve 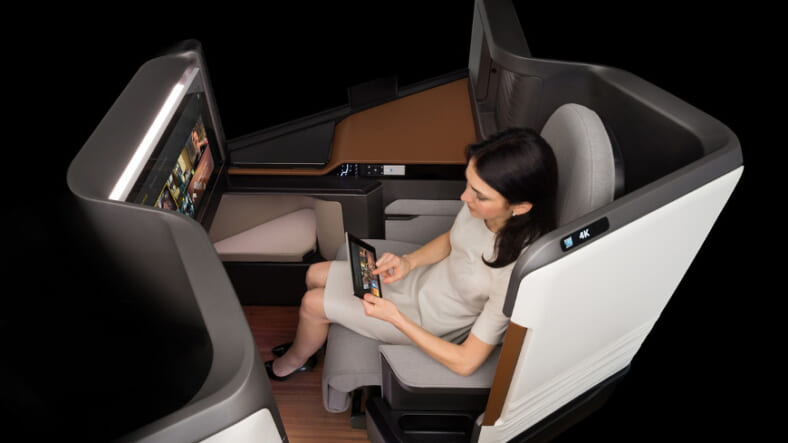 When exactly did business class go from almost first class to barely better than coach? Rather than just a pricy place to put people with wide hips, we found a seat that’s a proper respite for mobile warriors on the fly.Panasonic—behind-the-scenes designers of over 8,000 in-flight entertainment systems—wrangled together a dream team of seat makers, designers and consultants to create Waterfront, which integrates a variety of their electronics.Let’s start with the 24-inch 4K TV, a very classy way to enjoy a flick or two. But you won’t have to worry about getting fingerprints all over it. First cause your little enclave comes with a little tablet controller, but second because you can also use your own phone to control all sorts of stuff.After pairing your phone through NFC/Bluetooth, you’ll be able to fully adjust the mood lighting, temperature, seat position and more. And don’t worry about running out of juice, cause you can just lay it on the counter to wirelessly charge it—or use one of the USB ports, or plug it into an outlet.

Naturally, if you’re not into working or vegging and just want to zonk out completely in your do-it-all seat, just slide your privacy door shut, lie back and you’re in your own little world.Of course, given that it’s from Panasonic, would it have been too much to ask that they put some fancy massage chair technology in there? Apparently so. But still, we wouldn’t bat away a chance to slum it in one of these sky suites for a long haul.