Who says the rent is too damn high?! 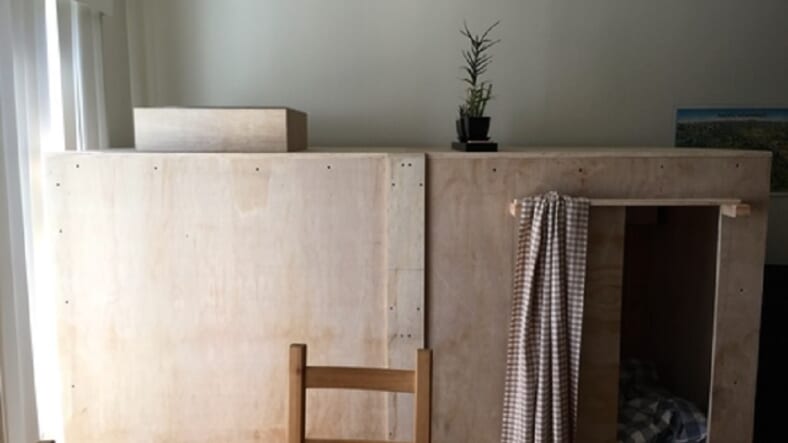 Imagine you’re a young guy and you feel the drive to head to where all the good work for your field might be—but you know you’ll have to struggle at first. For 25-year-old illustrator Peter Berkowitz his move to San Francisco meant living in a box. Not on the street, but in his roommates’ living room.

Berkowitz’s 8 foot long and 4.5 foot high “pod” cost about $1,300 to make, Berkowitz told the Washington Post. He pays $400 monthly for his share of the living space and doesn’t feel he’s living hand-to-mouth at all:

“It seems silly, and people have this dystopian take on it, like, ‘Is this what it’s come to?’” he said. “But I firmly believe that it makes a lot of sense. There should be some kind of middle ground between having a bedroom and sleeping on a couch.”

Berkowitz told the Post he “was inspired by Japanese ‘capsule’ hotels.” These are cheap nightly lodgings that basically function like cozy beds stacked atop one another.

Berkowitz’s creativity and his perspective about his tiny home within a home is inspiring, even if the “tiny house” thing has become a little crazy in recent years. We can’t fault Berkowitz’s ingenuity and it looks like cozy digs for a few nights, at least.

We just wonder if his fellow residents, who live in regular bedrooms and pay double his portion of the rent per month, will make one too many jokes about “putting Peter in his crate” or creepy “boy in the box” wisecracks. We know we sure would.