This Is When You Should Get Married, According to Statistical Analysis

If you want to stay together, that is. 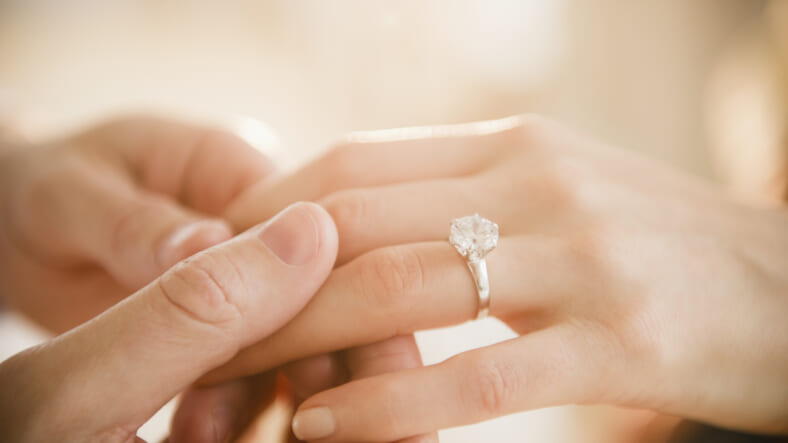 Way, way, way back in the day, people were encouraged to get married pretty early. Then, more recent ideology supported that the longer you wait to get married, the better your marriage would be. Well, which is it? Thankfully, we have math and statistics to solve this mystery and tell us the proper age to get married. Aren’t we lucky?

According to a new study published in the Institute of Family Studies, there is a precise window of four years between the ages of 28 and 32 in which you should bite the bullet and say “I do.” That rhymes, so it must be legit.

The study, conducted by sociologist Nick Wolfinger, analyzed data from the 2006-2010 and the 2011-2013 National Survey of Family Growth, and found that divorce rates decline as you move toward your late 20s and early 30s, then rise again about 5% each year after age 32. “My data analysis shows that prior to age 32 or so, each additional year of age at marriage reduces the odds of divorce by 11 percent,” Wolfinger wrote in the study.

Choosing this sweet spot in your life to get hitched might actually make sense, because before the age of 28, most people don’t have their shit together, and according to Wolfinger, “The kinds of people who wait till their 30s to get married may be the kinds of people who aren’t predisposed toward doing well in their marriages.” However, it goes without saying, these stats don’t apply to everyone, so take this information with a grain of salt.

If you’re a little skeptical of Wolfinger’s study, don’t worry, because Philip Cohen, another sociologist from the University of Maryland, is too, so he offered some alternative insight on the real proper age to walk down the aisle.

Using different data from the American Community Survey, Cohen’s analysis revealed that the perfect age for marriage isn’t until your mid to late 40’s, which is a lot different than what Wolfinger came up with, which Cohen says is why people shouldn’t give so much thought to things they read on the internet.

However, one important truth Cohen uncovered in his analysis is the fact that women who get married in their late 20’s and early 30’s rather than earlier are mostly college graduates, and as a rule of thumb, people with degrees have more money than those who don’t. So yeah, having more money could be a big factor in lasting marriages.

With all that said, maybe there isn’t a definitive “right” age to get married, but hey, nothing like a vague guideline to make you feel self-conscious and inferior!