5 Reasons Why You Should Sleep Naked

Who knew that snoozing nude was so good for you? 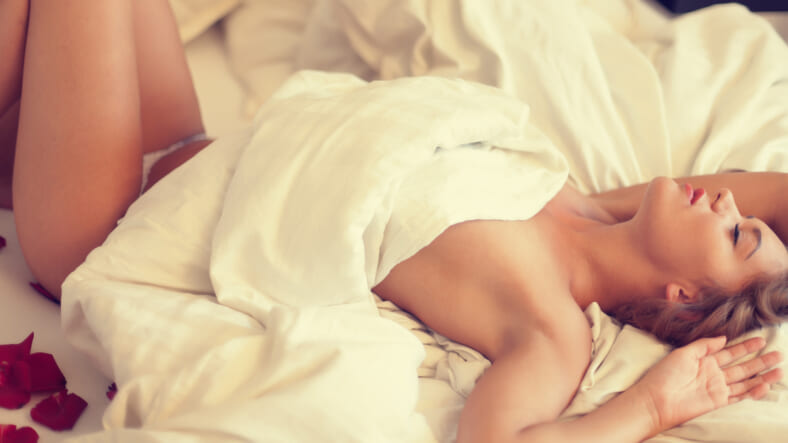 If you’re looking to make some healthy lifestyle changes this year, you’re in luck, because I know exactly where you should start: By taking your clothes off and sleeping naked.

Study after study proves that stripping down and spending your nights au naturale is not only fantastic for your sex life, but it’s also really good for you, because it offers a lot of surprising health benefits that you totally wouldn’t expect.

Even though there are a million and one reasons why you should be sleeping naked, here’s a list of the top 5, rounded up by the folks at Men’s Fitness.

1. It’s healthier for your manhood

When you sleep in boxer briefs or pajamas that hug your balls and keep them near and dear to your body, they heat up close to body temperature – somewhere around 97 to 98 degrees.

And in case you didn’t know, your scrotum hangs outside of your body because it needs to stay a few degrees cooler than the rest of you, or else it’s damaging to your sperm health.

Researchers from the National Institute of Child Health and Development and Stanford University found that men who wore breezy boxers during the day and slept in the buff at night had a 25 percent lower rate of damaged DNA in their sperm, relative to dudes who wore tighty-whities (or other restricting underwear) 24/7.

Moreover, sleeping naked keeps your huevos at a cool 95 to 96 degrees, which is the absolute perfect range for healthy sperm, so you should totally consider taking it all off in bed if you’re thinking of fathering children someday.

2. Your love life will get a boost

According to a large survey, ditching your pajamas might give your love life the boost it needs, because it was found that 57 percent of people who sleep in the nude are very happy in their relationships, relative to 48 percent who prefer to sleep fully clothed. And that’s probably because the folks who sleep nekkid have more sex than everyone else.

I mean, duh…when you’re in bed without a shred of clothes with a special someone, obviously it’s going to turn sexual pretty fast. You know, since removing your clothing is a precursor to naughty bedroom activities.

Plus, skin-on-skin contact from being naked in bed with another person gives you a nice rush of oxytocin, which induces feelings of intimacy, bonding, and sexuality. So go ahead and strip down. You won’t regret it.

3. It can make you healthier overall

Speaking of oxytocin, that same boost of the hormone that comes from getting naked in bed with your lady friend also offers amazing physical health benefits in addition to the mental and emotional ones.

Produced in the hypothalamus and then released through the pituitary gland, oxytocin, a.k.a. the “love hormone,” prompts the body to heal and promotes physical well-being by lowering cortisol levels, regulating blood pressure, boosting your immune system, reducing pain, and reducing anxiety.

And on top of all of that, oxytocin also helps you fall asleep and stay asleep, because it’s a powerful calming agent that makes you feel serene, tranquil, and incredibly happy.

For you to physically be able to fall asleep, your body need to cool down roughly .5 degrees Fahrenheit, and it needs to stay that way to stay asleep. Obviously, wearing clothes makes you retain heat, which is not the best thing when you’re trying to get a good night’s sleep.

“If anything prevents that decline in temperature, the brain will wake itself up to see what’s going on, meaning you’ll struggle to get to sleep or you’ll have disturbed sleep,” reads a research paper on sleep regulation.

And even if you immediately go back to sleep after waking up all hot and bothered, you won’t be losing out on how many hours of sleep you get, but you will get less quality sleep, which is just as bad.

5. You’ll be in better shape

We previously established that we sleep better when we’re nice and cool, but did you know that keeping your body cool and comfortable at night can help keep you healthier, and in better shape?

A study published in the scientific journal Diabetes found that sleeping in a cool bedroom and keeping your body temperature relatively low activates brown fat in adults, which is a type of “good” fat that generates heat, burns calories, and keeps us warm and comfortable.

Pair that with the benefits of going to bed commando, and you’ll be the epitome of health. Well, kind of.

With that said, go ahead and take it off. Take it all off.