Well, this is intimidating. 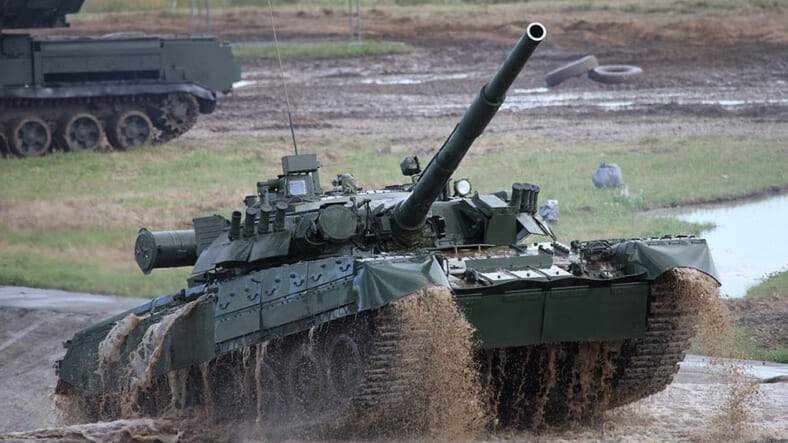 When national intelligence director James Clapper spoke to the Senate Armed Services Committee on Tuesday on the biggest threats facing the U.S., his focus wasn’t just on North Korea’s latest shenanigans. Clapper addressed intelligence concerns regarding other nations as well, including Russia, which he characterized as America’s “most sophisticated cyberactor,” reported the New York Times. And while Russia has the knowledge and capacity to wreak havoc on the U.S. in cyberspace, this relatively brief video spotted by Popular Mechanics makes it damned clear the Russians would still be hell to face on an actual battlefield as well.

As Popular Mechanics notes, the video appears to demonstrate a full battalion of 30 Russian T-80Us, the Russian army’s go-to iron beast of war, in the middle of a full-court press across an open field. The formation demonstrated in the video is strategic as well:

The tanks, advancing in line formation, are spread out horizontally. This minimizes the effect of enemy artillery, widens the frontage of the attack, and allows the tank column to more easily identify and engage targets in front of the battalion.

The video gives an extended history of the T-80’s use in battle. Since 1976 these bad boys have been used by various armies to blow things up in places like South Korea, Pakistan, and Ukraine.

Russia has been doing quite a bit of what was once called “saber-rattling” in the last few years. The country’s annexed part of Ukraine, had dust-ups with NATO members like Turkey, and generally behaved in ways that reflect the Bond villain sensibilities of the Federation’s enigmatic strongman, Vladimir Putin.

If a video like this demonstrates anything, it demonstrates the Bear is still over there, and the world is expected to take it seriously when it growls.