WATCH: Where and How We’ll Live 100 Years from Now 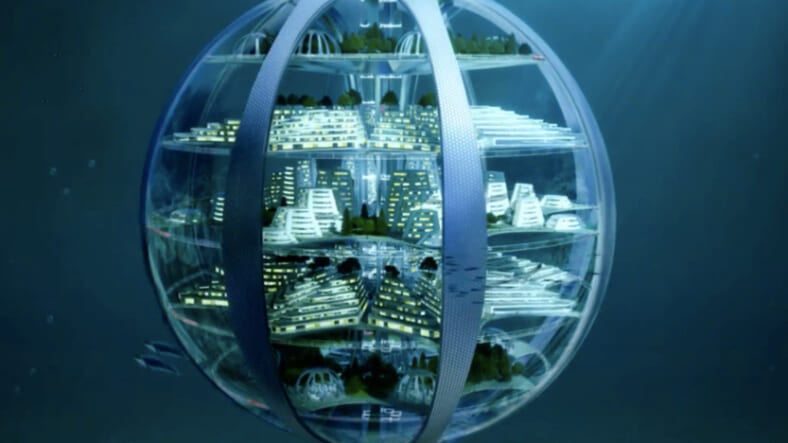 Now that we’ve survived the apocalypse Hollywood predicted, let’s take a gander at what’s in store for us in the world of tomorrow. As part of their SmartThings initiative, Samsung has released a Future Living Report (conveniently as both an 18-page PDF and 2 1/2-minute video) predicting where and how we’ll be living a century from now.

The theme throughout is self-sustainability, whether that means a spherical underwater city creating the air and fuel it needs from the surrounding sea, or a giant personal drone capable of transporting your home to wherever you feel like vacationing. (Side prediction: Everyone will bitch a lot more about having to flying coach.)

In addition to various green developments, we’ll be forging brown ones too. (Stick with us on this.) That is to say, we’ll create buildings that go deep down into the earth, rather than just reaching for the sky. So the world’s tallest buildings may not actually be the highest. (But they’ll certainly all be shiny and twisty and stuff.)

And lastly, despite the fact that an estimated 95% of our planet’s population is concentrated on just 10% of its land surface, what scientific wild-ass guess about the future would be complete without confidently stating that we’ll be inhabiting the moon (and then Mars)?The report does also mention stuff about 3D printing, virtual reality and morphing home structures, but we wouldn’t want to spoil the whole thing for you. Although, since it does hint that health advances may keep us alive much longer, maybe we’ll be able to see for ourselves. Just in case, be sure to bookmark this page and check back in ten or so decades.