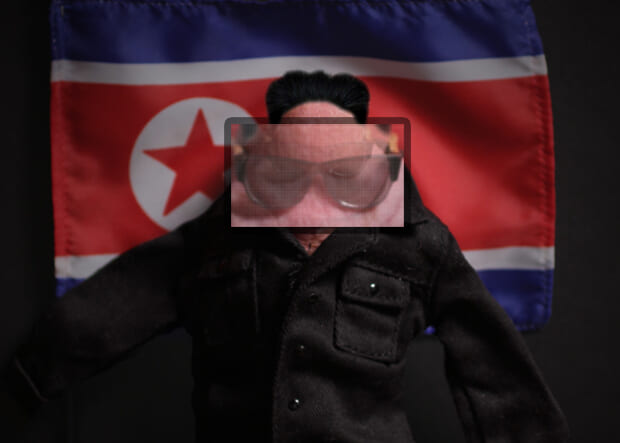 Sometimes, a brilliant idea just hits you. Such was the case when Soraya Doolbaz, tired of receiving lackluster dick pics, walked through a Wal-Mart, spied the doll section, and decided to dedicate her career to snapping photos of men’s junk. “I walked by the Barbie-Kan section and I was like, I think…I think that plaid shirt would fit nicely on a penis,” Doolbaz tells Maxim.

And she was right. The Iranian-Canadian photographer has since made a name for herself with her whimsically NSFW photos, which feature elaborately costumed members. Her personal favorite include the ‘Dictator’ series, a collection of infamous world leaders (think characters like Saddong Hussein, Cumrad Stalin), decked out in tiny, pint-sized outfits making full use of pubic hair for effect.

The photos have naturally caused a stir all across the internet, but the art world is taking notice as well. Doolbaz recently had her first show at Art Basel, Miami’s premiere art festival, which features some of the most famous artists in the world. Now, some of her limited edition prints sell for $10,000 a piece.

While one might think the average man vying for this particular artistic treatment would be an urbanite with too much time on his hands, Doolbaz says she gets a lot of requests from men in the military. The draw to dress up your dick is universal, it seems.

And so is her message. Doolbaz sees an inherent inequality in the way sexualized images of women, but rarely men, run rampant. “I want women to be comfortable saying, ‘This is a cute dick and I really enjoy it, and this is hilarious and I love it, and it doesn’t mean I’m a slut,'” she says.

But her art isn’t just for women. Doolbaz continues, “A big part of what I’m trying to do with this project is to create general acceptance for men…You don’t need a ten inch cock to be attractive or to get girls or to have a good sex life.”

However, not every guy has the chance to get a personalized penis photo shoot. But that doesn’t mean you should be cursed for eternity with sad, poorly lit dick pics. For the rest of you, she was kind enough to share her expert advice on how to take the perfect picture of your penis.

Make sure she wants it.“The number one rule about dick pics is to be certain the person that you’re sending it to has either asked for it, or if they haven’t, that you’ve already been intimate on some level. If you’ve never been intimate, that’s a surefire way to ruin a relationship that could have been something.”

Get your light right.“Everybody’s got a table lamp. Sit next to it, bring it close by…a well-lit room will do as well, but I think sitting next to a lamp and having some kind of lighting coming from one side is dramatic and it looks like you actually put some thought into it. But the last thing you want to do is take a dick pic in a dark bedroom or with your camera flash or like in a bathroom or something.”

Know your angles.“My favorite is reverse camera on a table, on a table or nightstand. But basically you reverse the camera and put your phone facing up and then you lean over your phone, keeping the balls out of it, using half the screen to get the dick in focus, and then the dick is front and center and you are blurry in the background.
Getting that under-dick is such an artistic shot and it just speaks like, ‘I put some thought into it, like I care, you know?'”

Avoid the ‘Comparison Dick Pic’“What annoys me the most is when some guy is like, sitting on a couch and there’s a can of Pepsi or something next to a dick, and a half-eaten takeout container nearby too.
Like he just finished eating and he took a can and put it next to him to show how big his dick is.”

Give yourself a hand.“One thing that is attractive is like, holding the base, so he stands up really good. You don’t need to full-hand grip it because then you are taking away from the dick pic. Your hands should be playing a supporting role. Do what you can with your hands to make sure the dick looks its best. “

Don’t fear the razor“I think a light trim with a trimmer looks good. You don’t need to be completely waxed or totally clean shaven, I think that’s ridiculous. Then you can get ingrowns and all these other issues. So I think trimming is best.”

Beware your underwear.“I’ve seen some photos, like a guy turned to side profile in like a full length mirror, pulling his underwear a little bit down. I think that’s cool, but it really depends on the underwear. Most guys wear underwear until deteriorates off their body. But if you have a nice pair and you could pull it down in a sexy way, have at it.”

Think you’re ready to take your junk pro? Get a closer look at her work on her website, and be on the lookout for her first book, set to be released in the coming months.