Because who cares about tempting fate? 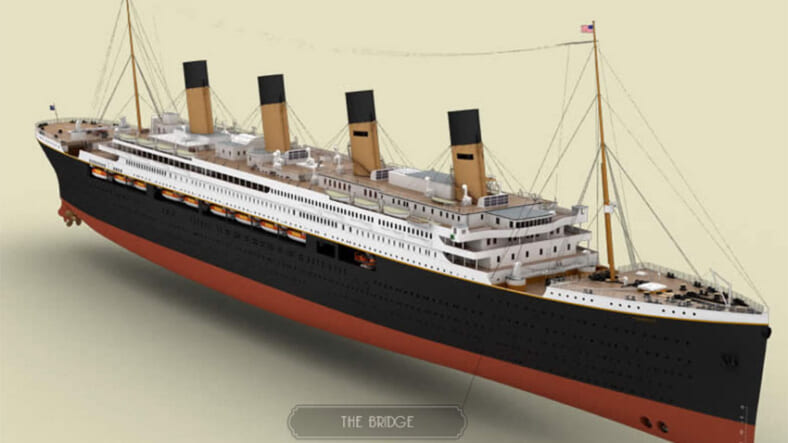 Clive Palmer is the billionaire owner of Blue Star Line, and since 2013 he’s been touting his company’s remarkable reboot: Titanic II, a full-sized —larger, actually— replica of the ill-fated Titanic, which so memorably sank in the North Atlantic in 1912. After a burst of publicity in 2013 and 2014 it was easy to believe Palmer thought better of the idea, but the Independent reported Tuesday that Titanic II is definitely a go. It will hit the high seas like gleaming ghost of its namesake in just two years, but it will be thoroughly modern cruise ship on the inside:

The liner will have a swimming pool, Turkish baths and gyms.James McDonald, the marketing director of Blue Star Line said: “The new Titanic will of course have modern evacuation procedures, satellite controls, digital navigation and radar systems and all those things you’d expect on a 21st century ship…”

This Titanic 2.0 will also have a full complement of life boats in addition to a deck featuring duplicates of the original Titanic‘s ill-fated life boats, according to the Independent. On the outside, it will look just like the original ship, but the Independent noted about 13 extra feet has been added to the hull’s width in order to meet modern safety requirements.

Titanic II will make its maiden voyage in 2018 from a port in East China to Dubai. The good thing about the route for this rebooted mega-liner is it’s highly unlikely the ship will encounter any rogue icebergs on the way.