Read on for the boozy tale behind that most American of liquors. 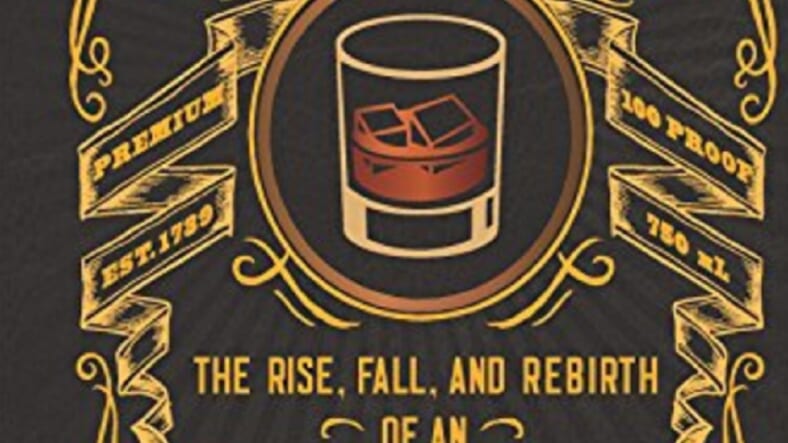 Bourbon is beautiful, any discerning drinker will agree. It’s also a spirit with a rich and fascinating history rivaling that of overseas cousins like scotch. Naturally, then, it appeals to the historian. That’s one of many reasons bourbon expert Fred Minnick has gone deep to give us Bourbon: The Rise, Fall, and Rebirth of an American Whiskey. Read an exclusive excerpt from the book below, and learn how bourbon gained its distinctly all-American character.

There’s nothing quite like a naked woman to get a man interested in bourbon. At least, that’s what Hugh Hefner thought when he created Playboy magazine. Playboy immediately recruited the alcohol industry for advertisements. In an advertising circular to whiskey distillers, Playboy said: “85.9 percent of all Playboy households drink or serve alcoholic beverage. 76.4 percent drink or serve whiskey. Both of these figures are the highest reported for any magazine.”

And so, after Marilyn Monroe bared her breasts in 1953, bourbon distillers advertised in Playboy. Jim Beam, I.W. Harper, Old Crow, Antique, Bourbon Supreme, Walker’s Deluxe, Early Times, Yellowstone, and eventually many others found a venue of pure marketing bliss in the nudie magazine, which became quintessential corporate reading material…. for the articles, of course. Although women drank bourbon, the distillery community opted not to target them and to focus solely on targeting men.

In fact, a 1957 liquor-focused Fawcett Publication study offered this wifely statement: “My husband is the absolute King in this department. He pays for it and decides what to get, and the price.” The study pointed toward wives making less than 5 percent of the liquor purchases for the home and quoted a woman from the study: “It’s a funny thing, but I never took a drink before I was married. I guess I learned to drink from my husband.”

This male-centric marketing coincided with a rising tide of temperance leaders attempting to ban alcohol advertising. The brewers, distillers, and winemakers fought these attempts in Congressional hearings, saying such bans represented just another form of prohibition. The Federal Trade Commission entered the picture and further regulated alcohol advertising, but did not impose a total ban, just restrictions. And the distilling community opted to impose its own guidelines that did not allow advertising on radio, television, in the comic pages of newspapers or newspapers, in publications owned by retail liquor dealers, religious publications, or anything related to a school or university.

Many spirits categories ignored African American communities in the 1960s, because white men were the breadwinners. But bourbon distillers respected these communities and pursued multimillion-dollar campaigns to reach them. The most prolific in reaching African Americans was Ancient Age, which hired black models drinking Ancient Age on the rocks.

After World War II, the world limited bourbon imports as Scotch enjoyed little to no tariffs. The newly formed Bourbon Institute—made up of all bourbon distillers, not just those in Kentucky— said it wasn’t fair that Americans couldn’t drink bourbon while abroad and pursued one of the greatest legislative conquests in U.S. history. Distillers wanted bourbon to be known as an American-only spirit and on level playing fields as Scotch in foreign markets.

Perhaps the most damning situation was the European Free Trade Association, known as the “outer seven.” The nations entered into an agreement to reduce tariffs on each other’s products by 20% during 1960, and by 10% per annum until January 1, 1970, when tariffs would be completely removed. This gave Scotch producers absolute market control over bourbon, which was charged a 100-percent tariff on controlled amounts of exports. “It is impossible for American distillers to create new markets for their product with typical American salesmanship,” distillers testified before Congress.

Bourbon distillers, many of whom were veterans of World War II, were perplexed with the United Kingdom’s absolute dismissal of American whiskey. The two countries were close allies, but apparently not in whiskey circles.

Outside of the United Kingdom, it was just as bad. Argentina, Brazil and Spain heavily penalized bourbon, opening the doors for Scotch and Canadian whisky. “The Bourbon Institute is in favor of the liberal trade policy followed by the United States Government and recommends it as a model for all other nations, so that people the world over may come to know and appreciate one of America’s great native products, fine old bourbon whiskey,” testified retired Admiral William J. Marshall of the Bourbon Institute.

In addition to exports, bourbon distillers faced consumer confusion with Mexican bourbon and other whiskey types. During Prohibition, two Kentucky families operated a distillery in Juarez, Mexico, where it successfully created and sold bourbon.

If distillers were to compete with Scotch and eliminate Mexican bourbon, they needed an official designation as a truly American product.

From 1958 to 1964, the Bourbon Institute used folklore to suggest that bourbon was invented on the same day George Washington was inaugurated. In the late 1950s, the only way the Bourbon Institute could have made bourbon sound more American was if they claimed the first barrel was used to squash a time-traveling KGB operative.

In February 1963, Thruston B. Morton (Republican, Kentucky) introduced a Senate Resolution declaring bourbon a distinctive product of the United States. It passed the Senate in September and moved to the House’s Ways and Means Committee the following year, which referred to bourbon as “our own native whiskey.” The committee moved it to the House floor, where it was met with opposition.

The Mexican bourbon distillery had ties to New York Congressman John V. Lindsay, who said he could get no assurance that the Mexican-distilled bourbon would not be barred from the United States drinkers. The New Yorker wanted assurances that the executive branch would go easy on the distillery, which Lindsay said was run by “nice old ladies.” Lindsay’s objection was enough to keep Congress from voting on April 30, 1964, which would have been the 175th anniversary of the imaginary bourbon invention.

After it passed on May 4, 1964, Lindsay stood up and asked: “This Resolution does not intend to hurt someone who derives his income from the importation of a little tiny bit of bourbon whiskey?” John C. Watts (Democrat-Kentucky) shook is head no. Lindsay caved and closed with poem before Congress:

“Is there a man with soul do dead,

“Who never to himself has said,

“This is my own, my native bourbon?”

The House then reportedly shouted approval. And bourbon distillers had to feel as though they were on top of the world. The year was 1964, and bourbon was America’s spirit, the dominant drink for the true man who liked two fingers, neat or maybe with a cube of ice or two. If he was a man, by God, give him bourbon. Little did the Bourbon Institute know that while they were focusing on legislative matters, the fickle consumer was turning its attention elsewhere. They wanted vodka, and bourbon’s slow death started as it was on top of the world.